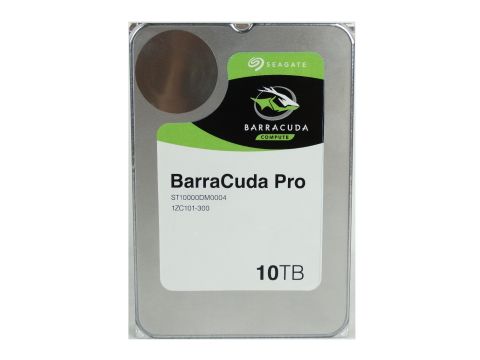 The flash industry can't satisfy high-capacity needs, so hard drives are here to stay. HDD vendors are using techniques from the flash industry to increase performance, but there is still a very wide performance divide. The Seagate BarraCuda Pro leads in desktop performance and capacity, which makes it a suitable secondary storage volume.

Seagate released the Guardian Series in mid-2016 with a focus on high performance, capacity, and reliability. Seagate designed its flagship desktop HDD for creative professionals, enthusiasts, and gamers. It features a speedy 7,200-RPM design with up to 10TB of capacity and an advanced cache system.

Most of us have transitioned to flash for our boot drives, but HDDs still serve a vital role for capacity storage. SSDs became more affordable in the same time frame as the catastrophic 2011 Thailand floods that crippled the bulk of global HDD manufacturing capacity. The flood washed away the final assembly factories and also the third-party factories that supplied components to the leading HDD vendors. As a result, hard drive prices increased while more powerful SSDs began a steady price decline that would continue for the next five years. As the HDD industry recovered, the vendors slashed warranties and focused on commoditized products.

Call it karma or whatever you will, but we have come full circle. SSD quality has declined as the flash industry enters its own commoditization phase and pricing has increased due to component shortages. Once again, we are looking for alternatives.

Hard drives can't compete with SSDs on the performance front. Even SSHDs (Solid State Hybrid Drives), which are much faster than normal hard drives due to a small amount of onboard flash, have failed to bridge the gap. Those products use low-cost, low-performance controllers to manage the flash, but that results in very inconsistent performance.

Intel's new Optane Memory smooths the consistency issues we usually encounter with HDD caching technology. Intel's Optane moves beyond flash with new 3D XPoint memory that is faster and more reliable than flash, but it's also expensive. You also need a motherboard made in the last year that supports the memory, and for many users that upgrade requires a new processor and DDR4 memory. Optane Memory will not enjoy significant uptake until newer chipsets become more prevalent.

The HDD vendors are not waiting for Optane Memory to improve their products. The Seagate BarraCuda Pro borrows advanced caching technology from the company's own enterprise line to increase performance. The drive also uses Helium inside the casing to reduce friction, which has the side effect of offering increased reliability and capacity.

The Seagate BarraCuda Pro comes to market in five capacities that range from 2TB to 10TB. All five 7,200-RPM models offer 220 MB/s of sequential throughput and 4.16ms of average latency. Those are the only performance specifications listed.

Seagate says that the BarraCuda Pro leads the industry in random read and write performance, but it doesn't disclose any detailed data. HDDs are magnitudes of order slower than flash-based devices during random workloads, which is why they are slower than SSDs in desktop applications. We can understand why Seagate doesn't want to publish random performance data, which is orders of magnitudes less than even the slowest SSDs, but if a company claims to be the "best" in a category, it should back it up with detailed specifications.

The BarraCuda Pro series ships in a standard 3.5" form factor with a 6Gb/s SATA interface. HDDs are complicated precision instruments inside the case, but they are simple for end users. Windows automatically manages the data through disk defragmentation schedules, and the advanced cache algorithms automatically boost performance.

All hard drives in the BarraCuda family come equipped with Seagate's Multi-Tier Caching Technology (MTC). This technology boosts HDD performance by applying intelligent layers of NAND, DRAM, or media cache. Each class of drive employs different features of the MTC suite, so our drive doesn't use a NAND component. The BarraCuda drives deliver improved read and write performance by optimizing the data flow through the various layers of memory-based cache.

The BarraCuda Pro uses an Avago drive controller. Avago purchased several storage-focused companies over the last few years, including LSI (that included SandForce assets), Broadcom, PLX, and others. Many of these companies hold IP in advanced caching technologies that Seagate uses to increase performance.

Hard drives use an address translation layer similar to solid-state drives. Over the last decade, and increasingly over the last five years, the technology has improved. For instance, the fastest section of the platter no longer holds data for long term storage. Now Seagate uses that section of the platter an extension of the cache hierarchy; it holds a copy of the data resident in the volatile SRAM and DRAM caches. That allows the drive to safely cache user data in the volatile memory, which in turn can be used more effectively to boost performance. Seagate calls the sliver of high-speed disk the Media Cache.

The Seagate BarraCuda Pro 2TB sells for $129.99 and pricing scales with capacity. The 10TB model we're testing retails for $399. You pay more for increased capacity, but many of the other specifications remain unchanged. For instance, every drive in this series features the same performance and endurance specification.

Hard disk drives have their own unique endurance measurements. The drive tolerates 300,000 load cycles, which is a measurement of how many times the drive arm moves on and off the ramp that secures the arm when the drive powers down. The workload rating is 300TB per year, which works out to 1.5 petabytes over the five-year warranty. We would call this a 1.5 PBW (Petabytes Written) rating if this were a consumer SSD.

We've covered data recovery services in the past and learned that this type of service isn't cheap. A 2TB HDD recovery can cost nearly $1,000 through a third-party service. Seagate doesn't provide users this service throughout the full five-year warranty, but it does provide two years of extra replacement coverage should something happen to your drive.

The BarraCuda Pro doesn't have a painted external case. I was reluctant to put a magnet on the case to see if it's aluminum or steel, but it looks quite different in bare metal form.

The Seagate BarraCuda Pro 10TB uses more platters than consumer HDDs did a decade ago, and each platter experiences air resistance and causes air turbulence inside the drive. Helium is lighter than the air we breathe, which reduces resistance and turbulence.

The BarraCuda's PCB is a standard affair with a drive controller, motor controller, and two RV sensors on opposing corners. The RV sensors allow the drive to detect and counteract vibrations.