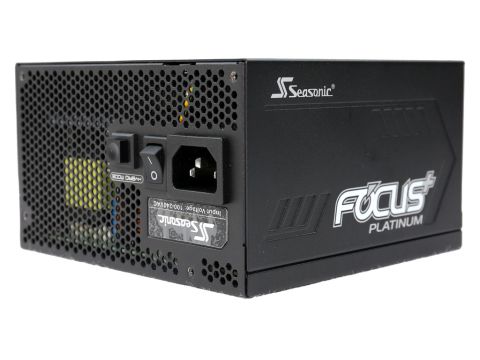 The hold-up time we measure is much longer than the ATX spec requires. Moreover, the power-good signal is accurate.

Inrush current is low with 115V input, but quite high with 230V.

The first set of tests reveals the stability of the voltage rails and the SSR-750PX’s efficiency. The applied load equals (approximately) 10 to 110 percent of the PSU's maximum load in increments of 10 percentage points.

Load regulation is great on the +12V rail, just as it was in the similar-capacity Focus Plus Gold PSU. The same goes for the minor rails.

In terms of efficiency, this PSU only satisfies one of the three 80 PLUS Platinum requirements, with 20% of its maximum-rated capacity load. Of course, you already know that we test at much higher temperatures than the 80 PLUS organization, and this greatly affects efficiency.

The fan profile is relaxed indeed; it only exceeds 1000 RPM during test eight, where the load is high and the operating temperature reaches 43°C. During the first four tests, this PSU operates in passive mode without the fan spinning at all.

Prev Page Teardown & Component Analysis Next Page Efficiency, Temperature & Noise
2 Comments Comment from the forums
Be In the Know