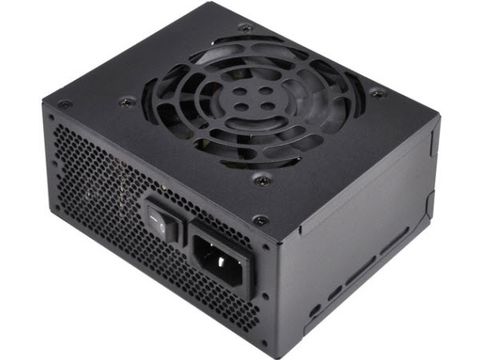 The SX550 might be one of the most affordable Gold SFX units with 550W capacity, however, its performance is average overall and the relative small price difference with the top-notch SF600 will probably make many of you prefer Corsair's offering instead.

The problem with SFX power supplies is that they're expensive. In the tech world, the smaller a component is, the more it usually costs. SilverStone seems to understand this, and the company now has a budget-friendly SFX that is made more affordable with fixed cables, shedding the modular leads many enthusiasts favor. Native cables might be a good solution for lowering a PSU's price without affecting its performance, but they also make the installation process much harder. In addition, unused cables can negatively affect airflow, particularly in a compact chassis. Fortunately, you'll probably come close to using all of the cables SilverStone attaches to its SX550.

This new model offers plenty of capacity for its compact dimensions; the single +12V rail can deliver up to 45 A of current. Considering its 80 PLUS Gold certification and ability to deliver full power at up to 50 ℃ ambient, SilverStone's latest looks promising. Thanks to its capacity and pair of PCIe connectors, the SX550 can support a gaming machine equipped with Nvidia's GeForce GTX 1070 or 1080. SilverStone is also promising quiet operation, despite the use of an 80 mm fan. Competitors like Corsair use larger fans in their SFX offerings to lower noise output. However, the combination of high efficiency and an optimized fan profile can also do the trick under normal operating conditions.

But the SX550's strongest asset is its price tag, which at time of review is $95. Corsair's SF600 is this unit's most notable competition, and that model sells for $120. Though the price difference between them is significant, SilverStone's SX550 needs to perform well if it wants to usurp the class-leading SF600.

This is a budget-friendly unit that SilverStone says was primarily designed for system integrators looking for value. In other words, don't expect extras like modular cables or a large 92 mm fan. On the other hand, all basic protection features except under-voltage and over-current (for the +12V rail) are included. Because the SX550 only has one +12 V rail, there is no need for OCP.

We like that this model can deliver full power continuously even at up to 50°C ambient. Conversely, two negatives include its sleeve bearing fan (though it's made by a top-notch manufacturer) and short warranty. When the competition is offering seven years of coverage, SilverStone needs to at least step up with a five-year warranty. Right now it's being much more conservative with its guarantee, which hurts the SX550's perceived reliability.

The minor rails offer 120 W of maximum combined output, while the +12V rail can deliver almost all of the unit's power on its own. The 5VSB rail is fairly typical for a modern PSU; SilverStone states that its peak amperage is 3 A.

The number of SATA connectors is low for a 550 W PSU, and the same goes for its four-pin connectors. Since this is a small power supply without modular cables, SilverStone chose not to overload it. We can understand that sentiment, though the ATX cable is very short. We're pretty sure it'll have a lot of compatibility problems with most mid-tower cases. All connectors use standard 18-gauge wires, which are recommended by the ATX spec.

Next Page Packaging, Contents, Exterior And Cabling
15 Comments Comment from the forums
Be In the Know