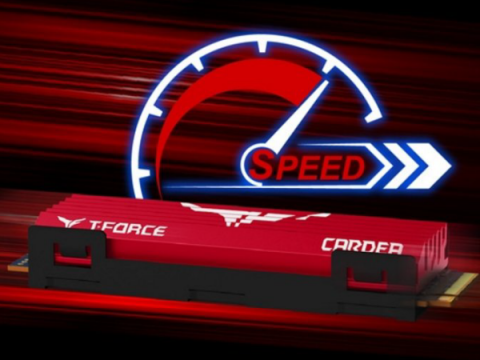 Thermal throttling isn't a big issue for most users, but a heat sink makes sense if your system has less than optimal airflow and a large video card covering your only M.2 slot. The Team Group T-Force Cardea 480GB delivers MLC NAND performance with passive cooling to create a more robust M.2 SSD than what we've seen before. We really like this drive, but expect to spend over $250.

Modern integrated circuits have a problem. Lithographies have shrunk while transistor technology has increased the switching frequency. The result is faster devices with a smaller surface area to dissipate heat. There are several ways to address the challenge. The first is to set a lower base clock and then boost the speed under load. This allows the IC to run cooler more of the time, but there is always some latency involved in making the jump to hyperspace (the turbo clock speed). The second method is to run the chip at full speed until it reaches a critical temperature and then downclock to reduce heat generation, but that actually slows the IC down when you need it the most. The third method is kind of old school. You just simply put a big heat sink over the IC and run full speed all the time. That's the solution we're looking at today.

Some early M.2 SSDs had minor issues with thermal throttling. At one time, we even measured the Samsung XP941 controller with an 114C surface temperature. I've never seen thermal throttling as a significant issue for most users. The truth is, we don't run these drives like you do at home. Our testing spans four days, and the drive is active nearly the entire time. Over the course of testing, we read and write years worth of data compared to a typical user environment. The accelerated testing allows us to measure performance during different workload patterns and to explore corner case issues. To mimic a real-world environment, we inject idle time to cool the drives off between tests and allow them to recover from the previous workload.

In contrast, most PC users load a lot of data quickly, roughly 15GB over 10 minutes, during Windows installation. After installing drivers and commonly-used apps, like Office, most data comes to the PC at the speed of the internet connection. Other common use-cases involve backing up data (reading most of the data on your drive at queue depth 1), and editing a 2GB video file. In a properly configured desktop with adequate airflow, it's difficult to see the effects of thermal throttling during these simple workloads.

Heat sinks can look really good from an aesthetics point of view. To each their own, my grandmother always said. They are not quite as audacious as RGB everything, but heat sinks do provide positive benefits for SSDs in a system with limited airflow.

Enter the new Team Group T-Force Cardea SSD. This drive uses a large full-length heat sink across a standard Phison PS5007-E7 M.2 2280 SSD. The heat sink is a full departure from the thin aluminum strip Plextor used on the M8Pe(G) M.2 SSD we tested several months ago. The Cardea uses a beefy heat sink that is more than adequate to cool the tiny E7 controller.

At first glance, the heat sink's height looks to be an issue with video cards mounted above the M.2 slot, which motherboard vendors commonly situate between two PCIe slots. That isn't the case. We tested five video cards, both AMD- and NVIDIA-based, and they all fit without touching the Cardea's heat sink. You would need a feeler gauge to measure the distance between the heat sinks, but we didn't run into an issue where the video card wouldn't seat completely. That's not to say all video cards with custom coolers will fit without issue. The video card companies ride the line of the PCIe specification, but some of the cards we tried, like the Asus GeForce GTX 680 DirectCU II TOP, are fine. The DirectCU II TOP is also the best example of a large GPU (it consumes 3 PCIe slots) that restricts airflow to an SSD under the PCIe slot.

Team Group released the T-Force Cardea in two capacities of 240GB and 480GB. We have the largest and fastest model in for testing.

There is a slight difference in performance between the two capacities. Most users will not see a difference in four-corner performance, but they will notice a difference in mixed workloads. The T-Force Cardea 480GB sports up to 2,650/1,450 MB/s sequential read/write speeds. Random performance comes in at 180,000/150,000 read/write IOPS, but to achieve those numbers you need multiple threads. We test with a single thread because that's how most software addresses storage.

The Cardea uses a PCIe 3.0 x4 connection and the NVMe protocol. This is the first Phison E7 we've tested with the new 3.6 firmware. The "M" in the E7M03.6 leads us to believe this firmware is MP or mass production, and that means it has been tested for compatibility and stability. We haven't heard anything about this update from any of the manufacturers, so it will be interesting to see what we find during testing.

The image above was taken three-quarters of our way through testing, and we'd already written 45 terabytes to the drive.

Team Group released temperature data for the T-Force Cardea with a large heat sink. There are three sets of data. The first is without a heat sink. The second says a "normal heat sink," but we're not sure what that actually defines. The third and final set measures the Cardea with the large heat sink. During a two-hour burn-in test, the heat sink kept the E7 processor nearly 20 degrees cooler than without a heat sink. We don't have any data about the testing environment. The Phison PS5007-E7 employs a dynamic throttling algorithm, and the controller can reach temperatures as high as 90C before activating an extreme throttle that severely degrades performance.

Newegg already carries the Team Group T-Force Cardea in both capacities. The 240GB model currently retails for $149.99. The 480GB model we have in for testing sells for $269.99. The pricing scheme moves the E7 out of the entry-level NVMe category and pits it against products like the OCZ RD400, Plextor M8Pe(G) (M.2 with heat sink model), and Samsung 960 EVO.

We didn't find any accessories inside the package and Team Group doesn't have SSD Toolbox software.

Team Group backs the T-Force Cardea with a 3-year warranty limited by the amount of data you write to the drive. The 240GB model can absorb 335 TB of warrantied data writes, while the 480GB model comes with 670 TB.

The Team Group T-Force Cardea retail package is fairly straight forward. You get the drive in a retail-ready blister pack, but there is very little information available for retail shoppers. Team Group doesn't have a retail presence that we are aware of, so most of these drives sell online.

The Team Force graphic appears with the drive at an angle. You can still see it straight on, but you get the full effect at an angle. The heat sink retention bracket doubles as a cooling device on the other side of the drive. This helps to spread the heat from the NAND packages.

I can't say with certainty that the T-Force Cardea will not fit in any notebook, but it doesn't fit in our Lenovo P70 mobile workstation, which is the largest notebook I have with NVMe support.