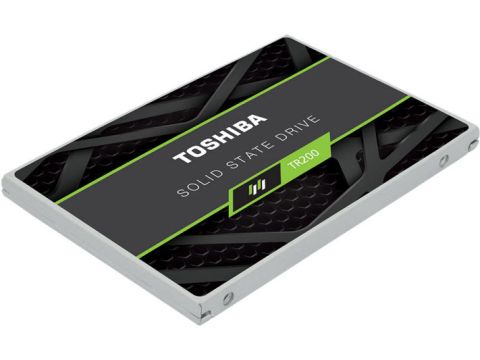 Entry-level SSDs generally target low price points, and lower capacity products cost less than larger ones. That makes the TR200 240GB analysis slightly more important for shoppers looking to add a low-cost SSD to a basic system. After all, that was the purpose of DRAMless SSDs when they were first launched.

The TR200 240GB has a pricing problem compared to Samsung's mainstream 850 EVO 250GB SSD. The TR200 will come to market priced just $10 less than the industry standard EVO. At one point it was reported that Samsung discontinued the 250GB capacity model, but Newegg, Amazon and other sources still have the drive in stock.

The 850 EVO 250GB is part of the comparison product list along with a few more DRAMless products. The Corsair Force 200 LE and HP S700 are both DRAMless models. They are joined by the Crucial BX300, Mushkin Triactor, and Plextor S3C. All the comparison products fall into the entry-level category, with the 850 EVO being the sole exception. The EVO sells at a similar price point to the other products, and that makes it a crossover product. Its pricing gives other manufacturers headaches, but it makes shopping for an SSD easy.

The third and final TR200 shows nearly identical sequential read performance to the other capacities in the same product family. We expect this model to be better in relation to the other products, but we need to look at other areas of performance to see how it fares.

As we expected, the TR200 240GB is the most competitive model in the line up when we compare it to similar products. The performance is about the same across the TR200 product line, but many of the other products lose performance as capacity decreases.

The TR200 240GB slots in the middle of the entry-level products in random read performance. It outpaces the other DRAMless SSDs in nearly all queue depths.

We have to lump all of the DRAMless SSDs into a separate category because they have a performance weak spot with small-block random writes. We hoped the new BiCS FLASH would solve some of these issues, but the TR200 has a difficult time keeping pace with the HP S700, which features an SMI SM2258XT controller paired with Micron's first generation 3D TLC. We know BiCS is better than what we see in these charts today, but the controller and architecture hold the flash back from unleashing its full potential.

The Corsair Force LE 200 uses the Phison S11 DRAMless controller that is very similar to the Toshiba TR200's TC58NC1010GSB. The flash is the most important difference between these products. The Force LE 200 uses Toshiba 15nm TLC, and the TR200 uses BiCS3 TLC. As we get into workloads that provide better insight into the user experience, we see that Toshiba 3D TLC does increase performance, but the margins are much smaller than we expected.

The mixed random performance chart shows the same performance increase between the two similar drives. The TR200 improves in this key metric, but the architecture isn't capable of delivering the same level of performance as other products that utilize a DRAM buffer.

All of the products in the 256GB-class utilize 3-bit per cell (TLC) NAND, except the new Crucial BX300 with 3D 2-bit per cell (MLC) flash. The sequential steady-state test shows how the underutilized MLC still manages to keep performance high when the drives are nearly full. The TLC-powered SSDs continue to struggle.

The TR200 is in the mix, but it still lags behind many of the go-to products in this capacity. Most light-use computer users will not compare performance between two SSDs simply because they are migrating from a hard disk drive to an exponentially faster SSD.

The TR200 240GB is less than 20 MB/s faster than the Force LE 200 240GB. This is certainly disappointing, if not damaging, to the DRAMless category as a whole. It really makes us question this category going forward.

The DRAMless SSDs also cluster together in the service time test.

The DRAMless products continue to exhibit poor behavior during this test.

There was a hope that the smaller TR200 with a smaller address map would provide more performance than the larger models, but we didn't see that in many of our tests. The overall user experience is very similar to the Corsair Force LE 200 with Toshiba's older 15nm planar NAND, which is even more disturbing. There is virtually no difference in real-world use.

We discovered mainstream battery life results with the 240GB model of the T200. The drive doesn't deliver a significant battery life increase compared to DRAM products, and the drive that it should easily outperform with a 15nm DRAMless configuration is actually slightly better.