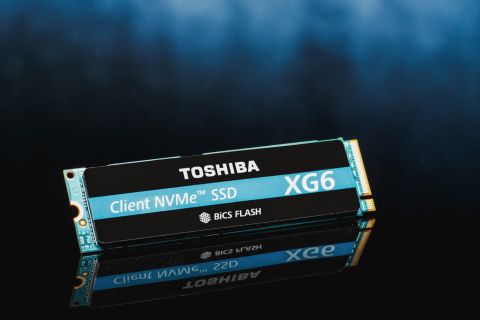 Toshiba’s XG6 is the first M.2 SSD to use the company's latest 96-layer 3D TLC NAND. We welcome the XG6's inherent advantage of faster flash performance with open arms, but this isn’t an SSD you can simply purchase on Amazon or Newegg. Instead, the SSD will make its way into laptops and other embedded systems over the coming months through OEMs and other B2B customers. We were lucky enough to get a test sample in our own hands to show off the performance to the public, but third-party SSD makers will soon build drives based on the same flash.

The Toshiba XG6 performed well in most of our tests. It isn’t an earth-shattering performer like Intel’s Optane-based drives, but it is still impressive. The XG6 attained the second-highest score we have seen from a flash-based SSD in the PCMark 8 test, which is great news for content creators.

Conversely, the drive didn't perform nearly as well in SYSmark 2014 SE. The XG6 beat the Crucial MX500 SATA SSD, but there was a relatively large gap between it and the other mainstream NVMe options. In contrast to PCMark 8, which tests one program at a time, SYSmark’s responsiveness score measures the snappiness of a system while it does multiple different tasks at once. This test isn’t the end-all-be-all measure of performance, but is a great test to show which SSDs can keep up with diverse workloads and which ones could improve. Toshiba has likely tuned the XG6's firmware for a specific customer, but it could use a little more refinement.

The Toshiba XG6 still delivers great real-world results in many common workloads, like our custom file transfer test. The XG6 hit peak sequential speeds of 3.25/3.0 GB/s read/write, and it even provided 1.5/1.6 GB/s of throughput when our synthetic workload spilled outside of the SLC cache. That makes it one of the best TLC SSDs on the market for extended write workloads. We could ask for a larger dynamic SLC cache like Intel's 660p, but the current design is sufficient for most desktop workloads. Toshiba also has the XG5-P, a performance-oriented product for OEMs, which delivers faster sustained write speeds. Toshiba has confirmed that it will also refresh that series with the new 96-layer flash.

The XG6 also proved to be a very efficient drive. The XG6's average of 138 MB/s of throughput-per-watt earns it the title of the most efficient SSD we have tested under load. There is still room to improve, though. The drive consumed 173mW at idle with ASPM enabled, but the Samsung 970 Series and Intel 660P consumed less power under the same conditions.

Overall, the Toshiba XG6 delivered great performance and some of the best efficiency metrics we've seen. The compact M.2 2280 single-sided form factor and support for TCG Pyrite and TCG OPAL 2.01 encryption should make it a popular choice for OEMs, especially those that design business-class laptops. We look forward to seeing these SSDs on our test bench in future laptop and pre-built PC reviews, not to mention the enthusiast-class SSDs that will come to market soon with the same flash.