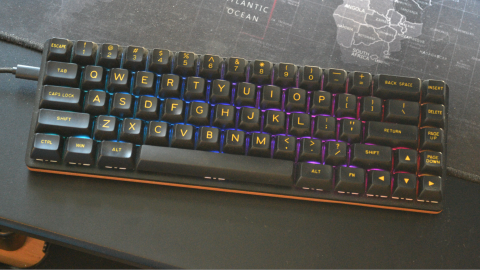 Innovation comes in all shapes, sizes and materials; in this case, it comes in the form of a slice of luxurious wood. Before you picture something much worse, let's be clear: the Woo-dy isn't in the same bracket as the gimmicky bamboo membrane keyboards you may have seen floating around. The Woo-dy reserves its wood for the base (in our case made of cherry wood, but a darker, pricier walnut base is also available), with a top layer that goes out of its way to evoke the bespoke, limited-run mechanical keyboard market. For many users, that bespoke look and feel will be very appealing.

Like the majority of bespoke mechanicals, the Woo-dy isn't necessarily cheap, and it may be tricky to get your hands on. It started life as a Kickstarter project and has now moved to Indiegogo after meeting its initial funding goal.

Early-bird pricing is $109 for this USB-C cherry wood version and $129 for the walnut, rising to $149 and $179, respectively later on. All versions have Bluetooth built in, but a version with internal battery pushes the price to $129 (cherry wood) / $149 (walnut), with a jump to $179 / $209 when early bird pricing ends. In the versions without the battery, you must be plugged in to a power source to use Bluetooth, which makes that feature pretty much useless. If you do want one, you'd better act fast: maker Unick Invent says the stock available through IndieGoGo will be "the last time for you to get Woo-dy".

Is that wooden base just an aesthetic gimmick? The creators claim this "adds beauty, harmony and a touch of relaxation to any work area," which are things I didn't think I needed. But what do you know? It's actually really nice. My review unit was impeccably carved, save for a tiny blemish caused by a slight knot in the wood on one corner and beautifully sanded to a smooth finish.

You don't really see much of the base while you're typing on the Woo-dy, but the sliver that's on show really works below the double-shot keycaps, which carry an old-school font redolent of the early days of PC keyboards.

But that wooden base also means some sacrifices. There are no in-built risers, just a set of rubbery pads. This is a deliberate choice made for aesthetics, but one that won't suit every wrist.

As for stability, the wood/aluminum combo of the chassis seems to have a vastly positive effect both on the acoustic properties of the Gateron Brown switches in this review model, and on the rigidity of the Woo-dy's extra-sturdy frame. This is one stiff, reassuring build. Cleverly, the switches themselves are hot-swappable if you fancy a change of feel and don't mind pulling your keyboard to bits to make it happen. Unick also offers it configured withGateron Blue or Red switches, if you'd prefer a clickier or more linear feel.

While the main body is solid and satisfying, the same cannot be said of the included USB Type-C cable, which plugs into a fairly indistinct side-mounted port. That's definitely not the best location for a cable. More than once during testing I managed to accidentally dislodge it with my left pinkie, and the cable supplied with the Woo-dy is, while braided, just about the flimsiest example of a Type-C cable you're likely to find.

Surprise: switching from a full-size keyboard to the Woo-dy's 67-key layout is not really that difficult, at least in terms of typing. It felt immediately natural, and I found the brown switches immensely satisfying. There's something about the speed, the clatter of the caps bottoming out after a distinct but silent tactile bump and the rigidity of the whole unit. This really is very pleasant to type on. I'm more used to full-size or tenkeyless layouts, but I didn't miss the excised keys one bit. If you need them, they're accessible through Fn- shortcuts. But the cool factor means these aren't marked on the keycaps, so you'll need to remember where they are.

It's also pretty accurate, at least if you can become accustomed with or are used to a U.S. layout (Unick isn't offering international variants). Though this seems like the sort of keyboard that would attract those who would happily invest hundreds in their own custom-made keycaps, the Woo-dy's use of Gateron's new ergonomic keycap design is commendable, and the switches probably don't need switching out. They're not perfect, with a notable flaw that I'll discuss below, but the spherical top edge of the keys makes a marked difference to the profile-following dish of most keyboards that led to me scoring higher than usual in typing tests.

The Woo-dy managed well through a few high-intensity Tetris games and coped fine with Apex Legends. The left cluster of keys doesn't differ much in terms of size or spacing from any other keyboard (U.S.-only layout aside), and the dished caps make every key neatly distinct . Although, the slightly more raised position of the Tab row in this contoured profile didn't play nicely with my personal brand of RSI (repetitive strain injury).

The Woo-dy works fine in Bluetooth mode, but the lack of appreciable extras like USB passthrough for connecting another peripheral, media controls, or even easily accessible F-keys raises the question: is this really a gaming keyboard? It has the switches and the RGB lighting, N-key rollover and a fair amount of poise, but I'd argue it's more a device for keyboard aficionados than high intensity gamers.

The Woo-dy is such a classy keyboard, so neatly constructed, heavy and solid with a vintage look to the keys and a compact size. Then you plug it in, and the per-key RGB basically ruins the effect.

If ever there were a keyboard that didn't really need lighting, it would be this. There's not even a huge amount of base or space between the keys for that LED lighting to make a real difference. And here's the real kicker: the space between the keys is really the only thing it illuminates, since the keycaps (beyond a microscopic bloom through the arrow keys) are absolutely opaque. It's all a little odd. We tested a prototype, though, and Unick says that the retail version of the Woo-dy will have white-legend keycaps, so these may be slightly more translucent.

As jarring as it may be, though, the lighting is attractive, with a bunch of different modes and effects on offer, and in some cases it's even useful – activate the Winkey-lock, for example, and said key will glow red. Switch on Bluetooth with Fn+Space, and the shortcuts for the three built-in profiles will flash.

We weren’t supplied the software to test, as it wasn't ready at press time, though Unick's package looks suspiciously like a reskinned version of the software used by the GK6X Plus 67-key mechanical keyboard that did the rounds a couple of years ago. That package didn't work with my Woo-dy, sadly, but eventually the software will offer macro customisation, lighting tweaks, and the usual keyboard configuration settings.

Of course there will be people out there who are more than happy to ditch those superflous numerical and function key switches that the Woo-dy's reduced size form-factor caters for, and for you typing aficionados perhaps this is right up your street. But for everyone else, you'll want to have another keyboard on hand to do all those things the Woo-dy struggles with, at least until you get used to the workarounds. We’re kind of OK with that though: this is form in perfect line with function, and it's a great companion for those times when not every key matters.