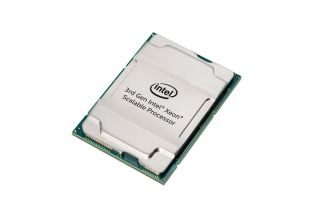 After a winding series of changes on its way to market, Intel announced its third-gen Xeon scalable "Cooper Lake" platform today for quad- and octo-socket server platforms, along with new persistent memory, SSDs, and an AI-optimized FPGA. The new processors come with Intel's 14nm process and span up to 28 cores and 56 threads, with headline features including support for bfloat16 as part of the company's DL Boost suite for AI workloads and support for faster memory speeds.

The processors arrive after Intel introduced its Cascade Refresh chips for two-socket server with drastic price reductions to fend off AMD's EPYC Rome. Meanwhile, AMD is also gearing up to release its 7nm EPYC Milan processors that will grapple with Intel's almost-mythical 10nm Ice Lake chips, both of which are slated for production in the latter half of 2020.

AMD's EPYC processors don't scale beyond 2S (two socket) platforms, which would seemingly give Intel freedom of navigation in the scale-out 4S and 8S segment, but AMD's EPYC platform currently has up to 128 cores in a single 2S platform while Intel's new line tops out at 112 cores in a 4S system, meaning AMD can still compete with Intel's 4S platforms in some compute-heavy workloads.

That drop-in compatibility was important because Intel planned to release Ice Lake soon after, but many questioned if server vendors would adopt the Cooper Lake lineup given it's incredibly short lifespan, especially in light of the relatively long deployment cycles in the server market. Intel says that after speaking to its customers, it ultimately decided to limit the Cooper Lake rollout to scale-out 4S (four socket) and 8S Cedar Island platforms due to the timing of the Ice Lake processors. Intel plans for the 10nm Ice Lake processors to address the mainstream 2S market.

Intel also says that its next-gen Sapphire Rapids processors, which will re-unify Intel's stack with support for 1S to 8S Eagle Stream platforms, have finished power-on testing. Intel also disclosed that the processors support Intel Advanced Matrix eXtensions (AMX) targeted at improving performance in training and inference workloads. Intel hasn't shared the details surrounding AMX yet, but says the specification will be published later this month.

Intel's previously-announced 56-core Cooper Lake models are missing from the announcement, and we've followed up with Intel for clarification on the status of those models.

Intel also announced the Intel Optane persistent memory 200 series, which brings up to 4.5TB of memory per socket, a new line of SSD D7-P5500 and P5600 TLC SSDs, and shared details of an upcoming AI-optimized Stratix 10 NX series of FPGAs. Intel also has its Gen 3 Movidius VPU in early access and is now sampling the first Habana deep learning/training AI processors to cloud service providers.

The Cooper Lake family comes with 11 SKUs that span from 16 cores and 32 threads up to 28-core 56-thread models. Three of the models are 'L' series processors that offer more memory capacity (4.5TB) than their standard counterparts, which support 1.12TB of memory. As expected, you'll have to pay more for the 'L' variant.

TDP ratings span from 150W up to 250W, and the chips feature significantly higher boost frequencies than their previous-gen counterparts. The range-topping 250W Xeon Platinum 8380H comes with a single-core 4.3 GHz boost, which is a 300 MHz increase over the Platinum 8280, which served as the previous-gen flagship. The processor also gets a 500 MHz improvement in all-core frequency to 3.8 GHz, and a 100MHz increase in base frequency. It's notable that the $10,009 processor features a higher 250W TDP compared to the similarly-priced 205W Platinum 8280, while the 205W Platinum 8376H at $8,719 slots in as a more comparable model with the same TDP.

Intel also introduced its new "Barlow Pass" Optane Persistent Memory 200 series DIMMs with the promise of 25% more more memory bandwidth than the previous-gen Apache Pass models. Capacity remains at a maximum of 512GB per DIMM with 128GB and 256GB available, and memory speeds remain at a maximum of DDR4-2666. Other key metrics have improved courtesy of a new controller chip, with the endurance of the 512GB modules increasing to 410PBW in 100% write workloads, and improved throughput from 5.3 GB/s to 7.45 GB.s in read workloads, and write performance increasing from 1.89 GB/s to 2.6 GB/s.

As per Intel's standard cadence of enterprise SSD releases, new SSDs are announced at the same time as new processors. The Intel SSD D7-P5500 and P5600 drives come with 96-Layer TLC NAND and feature a new PCIe 4.0 SSD controller. The SSDs come in U.2 form factors with capacities that range from 1.92 to 7.68TB for light-use models with a 1 DWPD endurance rating, while more endurant 3DWPD models span from 1.6TB to 6.4TB.

We're still tracking down a few more details from the launch, and will update as necessary.