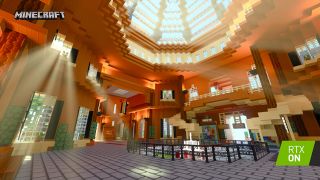 Minecraft’s low-fidelity world is about to get a lot more real for RTX owners, according to a new blog post from Nvidia detailing the process behind the ray tracing features coming soon to the game. First announced at Gamescom 2019, Minecraft with RTX is an upcoming free update for the Windows 10 version of Minecraft, which is set to bring ray tracing to the world’s best-selling game...provided you have Nvidia RTX hardware.

Ray tracing is an advanced rendering technique mostly reserved up to this point for CG films, which uses virtual rays of light to simulate realistic lighting, reflections, shadows and the like. In the past, this has cost too much processing power to be effective for real-time renders, but for RTX 2060 GPUs and above, Nvidia is planning to use the tricks outlined here to hit a minimum of 60 frames per second at 1080p resolution with ray tracing.

The blog post details how ray tracing will work in Minecraft, starting up with a free upload of the full 45 minute presentation Nvidia gave on the topic at this year’s GTC. Here, Nvidia discussed adding  real-time ray tracing to the game, including the code behind it.

PBR, or physically based material, textures are also coming in Minecraft with RTX, and will enable emissive blocks, roughness mapping, volumetric effects and other tools to help players get the most out of their new ray traced worlds. PBR textures are open for both official and fan use, and Nvidia has written a guide for creating your own PBR textures here (or you can watch their video tutorial below).

Prior to this post, we’ve only seen hints of what Minecraft with RTX will look like, including recent screenshots showing a ray traced Minecraft from the Xbox Series X specs reveal, though that version was  running off a custom AMD RDNA2 graphics card instead of the RTX line. To show off Minecraft With RTX, including its PBR textures, more thoroughly, however, Nvidia also recently collaborated with three Minecraft creators to make new worlds that demonstrate what ray traced Minecraft is capable of.

Of Temples and Totems by Razzleberries is an adventure world where players explore and complete challenges in mysterious temples, which focuses on showing off per-pixel emissivity (a PBR texture feature), real-time shadows, and global illumination.

GeminiTay’s Crystal Palace RTX is a survival map with a “whimsical fantasy theme” that uses ray-traced shadows and atmospherics to focus on realism in a 1:1 scale castle.

Meanwhile, Imagination Island RTX by BlockWorks is a fully explorable theme park with four distinct lands, each dedicated to showing off a different aspect of ray tracing. Nvidia’s screenshot of this world show’s off the visitor center, which focuses on god rays shining down through windows.

None of these worlds are playable as of yet, although Nvidia has screenshots of each with and without ray tracing effects on, for comparison.