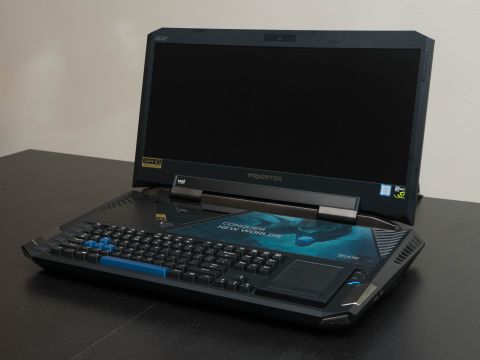 It comes as no surprise that a system as powerful as the Acer Predator 21 X takes first place in this less taxing game. The twin GeForce GTX 1080s easily breeze by the MSI GT73VR Titan SLI 4K, which uses two 1070s, and the two single-GPU laptops.

The second GTX 1080 garners the Predator a 16% gain compared to Eurocom's Tornado F5 and its single GTX 1080 in this DirectX 11-based title. Keep in mind that the Tornado F5 will always get a boost, to varying degrees depending on the game, by its desktop processor. Still, that scaling isn't particularly impressive.

More interesting is the boost we see after dialing Alien: Isolation up to UHD (3840x2160). We observe a 14% performance increase over two GTX 1070s (MSI) and a 31% increase over a single GTX 1080 (Eurocom). The GPU horsepower's value grows at higher resolutions. Still, all of the systems in this comparison set can handle Alien: Isolation with ease, even at UHD.

Ashes of the Singularity is much more demanding, and it favors strong CPU performance as well. Even the hefty Predator 21 X and its dual GTX 1080s are barely capable of maintaining 60+ FPS at FHD.

Interestingly, the Eurocom and its single GTX 1080 delivers 59.5 FPS, which is only 4% off Acer's score. This comes as a result of our testing Ashes in DirectX 11 mode to circumvent certain mGPU-related issues under DirectX 12. Unfortunately, though, the game does not support SLI, meaning one GPU goes completely unused in this benchmark.

MSI's Titan SLI struggles, despite its dual GTX 1070s, scoring 14% lower than the Predator and only 6% higher than the EVGA SC17 and its single GTX 1070, aided in part by its slightly stronger CPU. Again, this game's lack of SLI support under DirectX 11 does the dual-GPU configurations no favors.

Not surprisingly, the situation doesn't change much at UHD. The Predator 21 X still holds first place, but its average frame rate drops well below 60, so you're going to have to dial back a few settings to improve fluidity.

Just like Alien: Isolation, you can expect impressively high frame rates in Bioshock Infinite, and the Acer delivers just that. Here, the Predator lands just shy of a whopping 200 FPS, leading the Titan Pro by 8% and the Eurocom by 21%.

DiRT Rally is more dependent on overall platform strength, so a strong CPU will have a bigger impact. The SLI configurations don't enjoy such a big advantage, then, with the Predator 21 X and Titan SLI holding just a 10% and 7% (respectively) advantage over the Eurocom Tornado F5 and its desktop-class CPU.

The gap at UHD is slightly larger, but not by much. The Acer outdoes the Eurocom by 17%, whereas MSI establishes a 15% lead. More notably, the Predator only delivers about two additional frames over the Titan. Consider that the Titan is well under half the price of the Predator.

Historically, Grand Theft Auto V has proven to be one of our most demanding test titles, and even MSI's Titan SLI isn't always able to maintain 60+ FPS at FHD. The most stressful scene is the Vinewood Sign, which renders distant landscapes and offices. However, the Acer Predator 21 X finally breaks through this threshold and averages more than 60 FPS at 1920x1080 across all of the scenes.

Don't celebrate just yet, though. As we push up into 3840x2160, two GTX 1080s don't come anywhere close to 60 FPS in any of the test sequences. In Acer's defense, the Predator maintains 30+ FPS across the board, which no other laptop can do. And it clearly scales well thanks to that second GPU.

GRID Autosport, much like its racing companion, DiRT Rally, makes more demands of the overall platform. However, this time we witness an even greater CPU preference, which ultimately favors the Tornado F5's Core i7-7700K over the Predator 21 X's mobile Core i7-7820HK.

The situation shifts in Acer's favor when running GRID Autosport at UHD because the Eurocom machine doesn't have as much graphics muscle. This time, the Predator and Titan establish a 14% and 10% lead over the Tornado, respectively.

Hitman is an interesting test, because SLI scaling appears almost nonexistent when we run in DirectX 11 mode, even though the game supports multiple GPU. Instead, the system with the most powerful platform wins. With the Predator seemingly gimped to one GTX 1080, Eurocom takes first place thanks to its desktop-class Core i7-7700K and GeForce GTX 1080. The performance delta amounts to about 11%.

Running at UHD doesn't help Acer, as its Predator 21 X falls to 56.6 FPS. Meanwhile, the Tornado F5 averages roughly 60 FPS. If Hitman is your game of choice, and you have multiple GPUs installed, focus your efforts on getting the game to run well under DirectX 12 instead.

Metro: Last Light Redux used to be our game of choice when we wanted to see just how far we could push a GPU, but all of our laptops have been able to maintain a solid 60+ FPS as of late. The Acer Predator 21 X goes above and beyond by maintaining more than 120 FPS, matching its 120Hz refresh rate with some performance to spare. The SLI GTX 1080s scale by about 38% in comparison to the single-card Eurocom.

The next milestone will be running Metro: Last Light Redux at 60+ FPS at UHD; unfortunately, we're not quite there yet, even with the Acer's robust configuration. To maintain even 30 FPS, by the way, you'll need at least two GTX 1070s.

Rise of the Tomb Raider makes even heavier demands of the GPU, but the Acer Predator 21 X provides more than enough horsepower to average a smooth 60 FPS. A single GTX 1080 can handle RotTR adequately, but with such a GPU-heavy title, you'll need all the performance you can spare.

Unfortunately, the dual GTX 1080s don't fare as well at UHD, barely getting past 30 FPS. Be prepared to reduce settings like anti-aliasing if you want anywhere near 60 FPS.

For a much more strenuous workload, you can raise the resolution to UHD, which brings the average frame rate below 60 FPS. Unfortunately, you'll have to twist several knobs to get your frame rate back up, but the compromises you'll have to make aren't as severe with the Acer laptop.

Finally, we end our gaming benchmarks with Thief, which imposes a lighter workload, but isn't as specifically GPU-bound as the past few titles. At 1920x1080, the Acer Predator 21 X's dual GTX 1080s don't amount to much, especially in comparison to the single-card Tornado F5. In this case, the Titan SLI also experiences diminishing returns on its second GPU. To overcome the CPU limitation, we need an SLI configuration with a desktop-class processor or a more demanding resolution. (Teaser alert: such a configuration might just be on the test bench now.)

When running Thief at UHD, Predator owners can feel free to ramp the graphics up to maximum and still maintain over 60 FPS. In comparison, the MSI Titan SLI can also maintain 60 FPS, but it only has about 10 frames of performance to spare.

Prev Page Synthetic Benchmarks Next Page Battery, Thermal & Display Testing
55 Comments Comment from the forums
Be In the Know