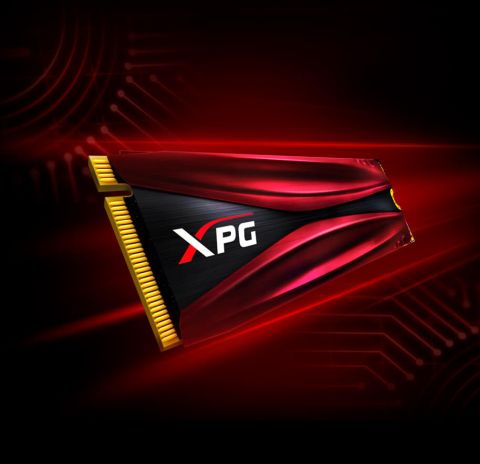 We mixed the discounted high-performance GAMMIX NVMe SSD with mainstream and entry-level products in our tests. Soon every drive in these charts will be discontinued and replaced with new 64-layer TLC-based models. That doesn't mean you will not be able to buy them, but supply will dwindle over time.

Adata's pricing places the GAMMIX S10 in the low end of the pricing pool. The 512GB Intel 600p and the 480GB MyDigitalSSD BPX make up the entry-level NVMe segment of the market.

The Adata GAMMIX S10 is difficult to test due to its DRAM and SLC caching. The controller can throttle, even with Adata's attempt to keep it running cool, and that compounds the inconsistent nature of the Silicon Motion SM2260 controller.

At low queue depths, the GAMMIX S10 starts off slower than the Intel 600p that shares a similar configuration. The GAMMIX S10 overtakes the 600p at higher queue depths. The crossover happens at QD8, which is well beyond what most users will reach during typical desktop workloads.

The HD Tune Pro 128KB write test shows us that the DRAM and SLC buffer will absorb roughly 25GB of data before things get crazy. The SMI SM2260 uses a "folding" method to move data from the SLC buffer to the TLC NAND. Here you see the result of the SLC buffer folding data to the TLC area and then taking in the new incoming data. You will not see your file transfer drop to 14.5 MB/s, but you will see an average between 500 MB/s and the minimum transfer rate.

That only happens after you've filled the buffer, and in this case, you would need to transfer more than 25GB at one time before that happens.

The Adata fits right between the two other low-cost drives in the random read performance test at QD1. The drive delivers roughly 900 more random read IOPS than the 600p. That's nearly four HDDs worth of IOPS, but it's a drop in the bucket in solid-state terms.

Random write performance has become less of an issue as we move to higher transfer rates with the NVMe protocol. Mainstream SATA SSDs are also capable of satisfying most random write requirements.

The random write results are much like the sequential write results. Performance is very inconsistent once you saturate the SLC buffer. You will not experience inconsistent performance during light workloads, but you might experience some sluggishness during heavy use. That usually happens right after a fresh Windows installation when we've installed applications, games, drivers, and Steam/Origin downloads as one extended task.

The odd write performance hurts mixed workload performance. This will be a rare occurrence on the 512GB and 1TB GAMMIX S10 drives due to the large SLC buffer.

The low price point is in line with the mixed workload performance. We found the Adata GAMMIX S10 at the bottom of the chart in this important test. The user experience rides heavily on these small-block mixed workloads.

Like the Intel 600p, we would not recommend using the Adata GAMMIX S10 in a workstation environment with heavy workloads. We're worried that some users may not be aware of the current segmentation and automatically assume the NVMe protocol still means very high performance.

The first NVMe drives were all high-performance models that delivered fairly consistent performance. As we move further down the NVMe road, we find that it's just like SATA. The technology builds to a peak, and then performance declines as companies make it more affordable. The random steady-state chart is the best place to see the downward trend. Early NVMe SSDs lined the charts with arrow-like lines with very little variation. Newer drives introduced seismic readings that look like the middle of an earthquake. In this case, we're not breaking windows or tearing down buildings; just the hearts and expectations of enthusiasts and power users.

The Intel 600p is the only product that competes with the Adata GAMMIX S10. The two SM2260 products with 384Gbit TLC fight it out for the "best of the worst" title.

We average the results into an easy-to-read throughput score. The Adata GAMMIX S10 is slightly faster than the Intel 600p.

The PCMark 8 Extended Test shows us the same positioning that we've seen throughout the performance portion of the review. The GAMMIX S10 runs right alongside the 600p. This test also shows that these drives do not like heavy write workloads. The drive falls flat under those conditions.

The service time test shows us there is a lot of additional latency under heavy workloads. The GAMMIX S10 can recover during light workloads, but even then, the drive trails many of the others, including those that cost just a little more.

The drive's cache is built to mask the low performance, but the dual-core processor has a difficult time keeping up in a high write environment.

Under moderate use, like what you may experience in an office environment, the GAMMIX S10 has a tough time delivering a strong user experience. We use the 1000 mark as a scoring tool for latency and the user experience. BAPCo set the 1000 mark with an OEM SSD from Samsung that is the equivalent of a Samsung 850 EVO with 3D TLC NAND.

Usually, we see lower-performing SSDs deliver some of the best notebook battery life in our test with a Lenovo Y700-17. That's not the case with the XPG GAMMIX S10. Even though you can't see the drive working hard, it is under the covers. The process of folding data from SLC to TLC consumes a lot of power. All the data has to pass through the SLC buffer, so the drive has to write everything twice. The impact on battery life is very clear.