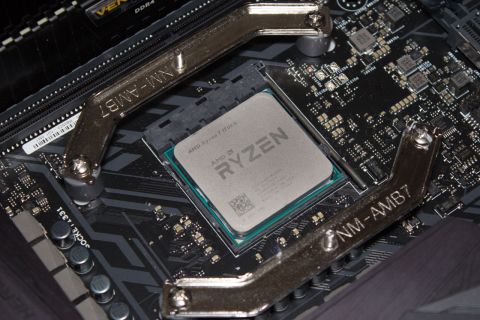 Our German team re-tested all of this hardware for today's story using the latest firmware. This especially affects the Ryzen 7 1800X and its 3.8 GHz overclocked results. Therefore, some of the updated test data no longer agrees with the launch results. Consider this a good thing. Maturity is helping Ryzen perform better.

We extended our AutoCAD 2D and graphics throughput benchmark for the GDI/GDI+ functions to the new CPUs and summarized the results in a common section. Absolutely nothing changed from the key conclusions in our launch article.

The Ryzen 7 1700X is well-suited for a number of threaded workloads, even if it trails the 1800X due to lower stock clock rates. Still, the differences we measure are often not noticeable during normal use.

The performance of these CPUs in our professional graphics workloads doesn't really change from what we saw in our 1800X launch coverage. However, we see that Ryzen 7 1700X is at a disadvantage without overclocking, since the architecture's IPC throughput is lower than Intel's. This particularly hurts in single-threaded tasks.

As we shift to more parallelized CPU-bound workloads, the Ryzen CPUs hit their stride and start beating some of the Intel processors that previously appeared much faster.

Workloads tuned for multi-core/multi-processor configurations love Ryzen. The stock 1800X and 1700X consistently appear in the top half of our test field, while the overclocked 1800X takes first or second place across the board. If you do a lot of rendering in Blender, 3ds Max, or LuxRender, Ryzen represents a good way to save money without compromising performance.

Considering the similar overclocking headroom available on 1700X and 1800X CPUs, a tuned 1700X should serve up even better value.

It's not as dominant in 7-Zip, but does trade blows with the Intel competition. Take a look at the 7-Zip decompression chart, specifically. Since Core i7-7700K lands at the top, we can assume this workload can't fully utilize the 8C/16T CPUs. This explains why a stock Core i7-6900K lands among the Ryzen configurations.

So long as the behavior of your workload is somewhat predictable, it's possible to guess how Ryzen will fare against Intel's nimble Kaby Lake models and beefy Broadwell-Es.

The results of these HPC-oriented benchmarks vary depending on how they utilize each architecture. As a general trend, though, when a test is able to exploit Ryzen 7's eight cores, AMD beats the Core i7-7700K. It's usually able to give Core i7-6900K a run for its money, too. In the cases where Intel's -6900K is significantly faster, we might suspect specific optimizations for efficiency on Intel CPUs. We know, for example, that there are accelerated packages for LAMMPS, one of which includes Intel CPUs and Xeon Phi. SPEC doesn't say if any of these are part of its wpc 2.0 suite, though.

Prev Page Project CARS, Rise of the Tomb Raider, The Division Next Page Power Consumption And Temperatures
122 Comments Comment from the forums
Be In the Know