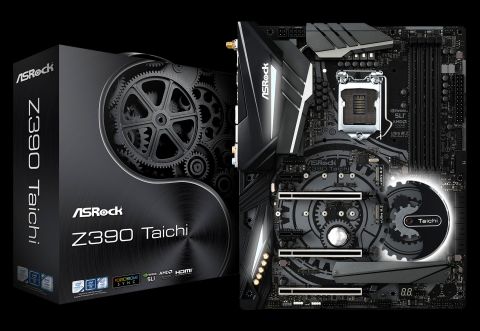 ASRock's A-Tuning utility still relies on firmware hooks to enable its Auto Tuning algorithm. But we found that setting our own manual overclock caused the A-Tuning utility to instead reduce our 4.9 GHz frequency to 4.3 GHz. That’s not optimal, but for a board that has no inbuilt “EZ OC” profiles for the Core i9-9900K, it’s a start. Hopefully firmware updates will improve the utility.

Manual tuning is also a functional option, and the System Info tab appears to do a fine job of tracking temperatures and voltage levels. Fan-Tastic tuning gives users the option to run an automatic optimization algorithm or set custom temperature-to-RPM curves.

ASRock's Polychrome RGB functioned normally with all onboard lighting and our DRAM, but it couldn’t set any advanced patterns such as color chasing from DRAM to onboard lighting or vice versa.

From Advanced Mode, the OC Tweaker menu shows basic stats, provides overclocking submenus, storage for five custom setting configurations as user profiles, and the ability to import and export those profiles to a USB drive.

The Z390 Taichi pushed our Core i9-9900K to 4.90 GHz at 1.30V. While that’s less than the default Intel Turbo Boost ratio for two cores, it also comes without the looser voltage limits that two cores can use without causing CPU thermal issues. By loading all eight cores and 16 threads, Prime95 small FFTs causes our CPU to pull over 330W at these settings.

While the Z390 Taichi came up 49MHz short of our CPU goal (the other two Z390 boards we tested pushed our Core i9 to 4949 MHz), it exceeded other models in DRAM overclocking. We reached DDR4-3867 with all four DDR4-2933 DIMMs installed, which is only slightly less than the same memory’s record on an older, more mature Z370/8700K combo.

CPU Load-Line Calibration compensates for voltage sag under load by boosting the voltage setting. At a CPU VCore setting of 1.30V, Level 2 pushed the CPU core past 1.312V, while Level 3 allowed it to sag to 1.20V. The best way to get the CPU to remain at 1.30V at full overclock under Prime95 was to choose 1.290V CPU core with Level 2 Load-Line Calibration.

It has become normal practice for motherboard manufacturers to push around 20mV more DRAM voltage than the user chooses, and our voltmeter shows that the Z390 Taichi follows this trend with up to 24mV over-voltage. After measuring it at the slot and making the necessary adjustment, we were happy to find that the board’s H/W monitor report was within 2mV of our voltmeter reading. In the past, some manufacturers have skewed their firmware readings to hide their hardware manipulations.

Overclockers who don’t want to hit “F6” at every firmware entry can change the UEFI default GUI to “Advance Mode” from the Advanced menu of Advanced mode. In practice, that's at least slightly less confusing than it sounds.

ASRock’s Internet Flash feature normally polls its servers for firmware and either proceeds with a download or, under normal circumstances, reports that no update is available. On the Z390 Taichi, it simply exited after poling, without reporting that no update was available. This is likely caused by this model’s download folder not yet being set up on the server, but ASRock wouldn’t confirm this when asked.

The main CPU fan header is PWM-only, but remaining headers are selectable between PWM and voltage-based RPM control mode. The “Auto” setting allows the board to switch based on the presence or absense of the fourth fan lead wire.

In addition to configuration tables, users can set fans using a graph from the Fan-Tastic Tuning sub-menu.