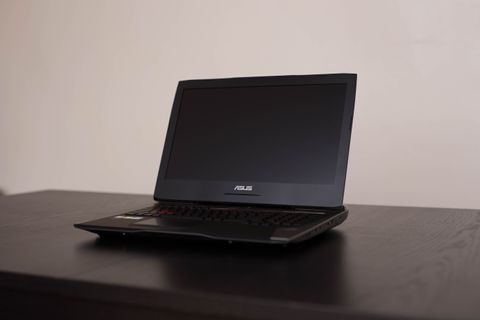 There are plenty of synthetic workloads to approximate a laptop’s battery life, but nothing quite beats real games. To test battery life, we set each laptop’s battery profile to Balanced while running Tomb Raider’s built-in benchmark at the lowest detail preset. The frame rate is locked at 30 FPS through GeForce Experience’s Battery Boost to limit the strain on the battery. Meanwhile, a script running in the background monitors and time stamps the system’s battery percentage. The laptops are set to hibernate once battery levels reach 5%.

Out of our first batch of Pascal-based laptops, Asus falls short of the competition. The G752VS OC Edition easily maintains a minimum of 30 FPS, but it only ran for 1 hour and 37 minutes. This makes sense, considering how beefy its components are. However, MSI's more heavy-duty GT73VR 6RF Titan Pro-201 lasted an additional 12 minutes.

Still, over an hour and a half of gaming on battery power is pretty impressive from such a potent configuration.

Our thermal testing employs Optris' PI 640 infrared camera. For more information about how we test, be sure to check out our Measurement Science article. We capture an image during idle, and after 15 minutes of a FurMark GPU stress test. While FurMark runs, we use Aida64 to record the GPU diode's maximum and average temperatures.

Note that typically we would take a thermal image of the laptop’s cooling system directly, as seen in a recent First Look of the MSI GE62 Apache Pro-14. However, the G752VS OC Edition is built in such a way that exposing the cooling solution requires extensive disassembly, after which the system cannot be powered on. Instead, we aimed the camera at the laptop’s underside and took temperatures from the rear exhaust vents and the approximate location of the GPU heat sink. For cases like these, our Aida64 log comes in handy.

At idle, the two rear exhaust vents only heat up to 29.6°C and 38.5°C, respectively. When we raise the heat with FurMark, the vent closest to the GPU measures 78°C. Sure enough, Aida64 detected a maximum temperature of 78°C with an average of 74.9°C.

The G752VS OC Edition’s 75 Hz refresh rate and G-Sync technology make it ideal for gaming. With the laptop’s Core i7-6820HK and 32GB of memory, artists might be interested in it as a mobile editing machine, too. However, to be a solid contender, the laptop’s display must also provide accurate color reproduction.

We used the SpectraCal C6 Colorimeter to measure the G752VS OC Edition’s panel. Be sure to check out our Display Testing Explained article for a full description of our methodology.

A balanced RGB profile should have red, green, and blue levels of 100 across all brightness settings. The DeltaE measures the color distance; if the value exceeds 3, then the color distance becomes visually noticeable. The G752VS’s display starts off with balanced RGB at 10% brightness, but as the brightness is increased, red levels rise while blue and green levels fall. Blue levels begin to rise at about 70 to 100% brightness. DeltaE exceeds tolerable levels once brightness reaches beyond 30%.

Compared to the P37X v6, the Titan Pro-201, and the Leopard Pro-218, the G752VS OC Edition falls in the middle of the pack. It has good minimum and maximum contrast ratios, but its average gamma is slightly lower than desired. The display is solid overall, but there's nothing special about it.