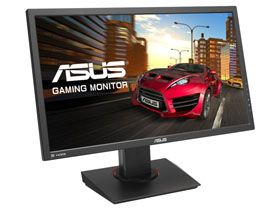 FreeSync can be added to any DisplayPort 1.2-equipped monitor essentially without cost. This has given rise to several new Ultra HD model introductions in recent months. We now have a large group of high-res gaming monitors from which to choose. Today we’re including Acer’s XB271HK and XB321HK, Asus’ MG28UQ, ViewSonic’s XG2700-4K and AOC’s U2879VF in our comparison group. All offer adaptive sync and a 60Hz max refresh rate.

The MG24UQ measures slightly under its claimed output level of 300cd/m2. The difference is a wash and doesn’t diminish its usefulness in the slightest. With such high pixel density, there is more than enough brightness for any game or productivity application one might use it for. If you need more light, the XB321HK offers a little extra punch.

Black levels are quite respectable at the backlight’s maximum setting. IPS offers good dynamic range, although it won’t match the blacks seen on a VA or OLED screen. Resulting contrast is decent at just over 1000:1. You can increase this a little by using ASCR but some detail will be crushed at the extremes of the brightness scale.

The minimum backlight level is a little lower than our preferred 50cd/m2. Just turn it up to 7 for that setting. Black levels and contrast remain consistent through the entire adjustment range. Contrast remains over 1000:1 and places it among the best of our Ultra HD gaming monitors.

We lost a bit of contrast during calibration by reducing the Contrast slider. This was done to correct a slight blue error that we could barely see. You can also solve this minor issue by selecting the sRGB picture mode. Output is locked at 170cd/m2, but that’s a level that will work in most room environments. With our tweaks, dynamic range is only reduced by 8%.

Most monitors post slightly lower ANSI numbers, and the MG24UQ is no exception. We’re still satisfied with its 832.3:1 result. The spoiler comes from a hotspot in the lower-right corner of the screen. Were that area more equal to the rest, the value would have been closer to 1000:1. Fortunately this did not hurt the uniformity results, which are quite excellent. So far, our benchmarks are showing the MG24UQ to be a high-quality panel.

Prev Page OSD Setup & Calibration Next Page Grayscale, Gamma & Color
13 Comments Comment from the forums
Be In the Know