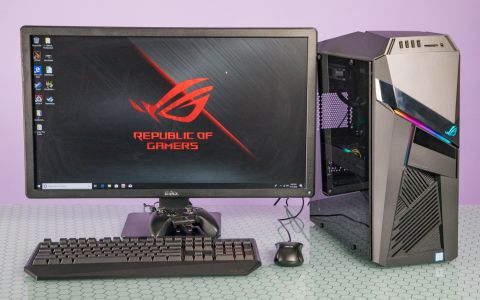 The Asus ROG Strix GL12 is an esports desktop with strong performance, ports for every accessory you’ll need and easy data-swapping, but you’ll want to uninstall the bloatware.

Asus’ new desktop is competition ready. The $1,449.00 ROG Strix GL12 is built for esports first, with an Nvidia GeForce GTX 1060 (6GB) GPU, a factory-overclocked Intel Core i7-8700K and a swappable SSD bay to quickly add new files or games that are too big to fit on your boot drive. It has loads of easily accessible ports for all of your peripherals, too. But that CPU may be overkill for esports games, which drives up the price a bit. Asus has also weighed down the desktop with bloatware that you’ll want to get rid of before gaming.

The Strix GL12’s exterior is a dark gray, angular monolith with some neat hidden talents. The front of the PC is decorated with stripes and RGB lines that hide air intakes. The top-most part of the front plate comes off with magnets to reveal the desktop’s hot-swappable SSD bay. It’s a neat trick to get game data (or other files) onto the system quickly. The front also features a glowing ROG logo. You can adjust all of the lights (both internal and external) with software.

The sides are the same gray color, although our review unit also included a transparent panel that shows off the internals, which I immediately applied because it looks so much cooler. One odd note: There’s a small etching on the panel that reads, “Concealed in darkness, lethal in battle.” I kid you not.

If you own a peripheral, there’s probably room for it on the Strix. The front panel alone is populated by four USB ports (two USB 3.1 Gen 1 Type-A and two USB 2.0 Type-A), as well as a headphone/mic jack and an SD card reader.

On the back live two USB 2.0 ports, a pair of USB 3.1 Gen 2 Type-A ports and four USB 3.1 Gen 1 Type-A ports. There’s also an Ethernet jack, S/PDIF out and five audio jacks. The GPU has two HDMI outputs and two DisplayPorts, and there’s a DVI connector on the case for older monitors. Note, though, that the DVI connector is connected to the CPU’s integrated graphics, so don’t plug your monitor in here for gaming.

Getting into the case is simple. Four thumb screws on the left side of the tower get you in without any tools. Of course, you’ll still need to break out screwdrivers to remove the CPU cooler, M.2 SATA SSD and other components. There are four slots on the motherboard for RAM, and ours came with a single 8GB stick installed. We’d prefer to see dual-channel RAM, but at least there’s room for growth up to 64GB.

The hot-swappable SSD bay is easy to switch out, but the HDD isn’t. You have to remove the right-side panel of the case, which involves removing two Phillips-head screws and sliding the panel off. The hard drive is accessible but lost in a mess of cables. If you want more room, you’re better off just upgrading the SSD or using the hot swappable SSD bay.

The Strix’s Nvidia GeForce GTX 1060 GPU with 6GB of VRAM is strong enough for most games on high settings and some basic VR--so long as you don’t have a 4K monitor. When I played Middle-earth: Shadow of War at 1080p on Very High settings, the game ran between 60 and 70 frames per second (fps) as I fought an Olog-hai.

On the Rise of the Tomb Raider benchmark (1920 x 1080, Very High), the Strix played the game at 74 fps, surpassing the XPS Tower (64 fps, GTX 1070) and the gaming desktop average (69 fps). The higher score of the 1060-equipped Asus here over the 1070-packing Dell is hard to account for, though the Asus’ overclocked processor likely helps it, as does more than a half year of driver updates--we tested the Dell XPS tower last October.

If you want to use the Strix with an HTC Vive or Oculus Rift, it will work but won’t be the best experience. The system earned a 7.1 on the SteamVR performance test, falling below the average (9.6) and the XPS Tower (10.7).

To test sustained performance, we ran Metro: Last Light 10 times on Very High quality to simulate 30 minutes of playtime. The average frame rate was 49.1 fps and consistent within less than one fps throughout each of the runs. The CPU ran at an average clock speed of 3.6GHz and an average of 53.6 degrees Celsius (128.5 degrees Fahrenheit). The average GPU temperature was 70.6 degrees Celsius (159.1 degrees Fahrenheit). Both are well within the thermal tolerances of those components.

With an Intel Core i7-8700K, 8GB of RAM, 128GB M.2 SATA SSD and a 1TB, 7,200-rpm HDD, it’s no surprise that the Strix is plenty powerful for productivity tasks. My usual workload of 25 tabs open in Google Chrome, including one streaming a 1080p episode of Late Night with Seth Meyers, was child’s play for the gaming desktop.

On our Excel macro test, the Strix paired 65,000 names and addresses in 33 seconds, blazing past the 42-second category average.

Our Handbrake video editing test took 9 minutes and 16 seconds to convert a 4K video to 1080p.

Asus includes a keyboard and mouse with the Strix, and the former is surprisingly decent for a pack-in. Don’t get me wrong, it’s a membrane keyboard and the keys are clunky, but it has dedicated media controls, which you rarely see. On the 10fastfingers.com typing test, I reached 111 words per minute, which is in my usual range, but my error rate, at three percent, was higher than my usual two percent. This might be good for a few months, but you’ll probably want to upgrade to something better, possibly with mechanical keys and some RGB lighting.

The mouse is plain and simple: two buttons and a scroll wheel. You’ll definitely want to upgrade to something with higher DPI and more buttons.

Unfortunately, Asus went a little overboard with the preinstalled software. Sure, there’s some useful stuff, like Aegis III, which shows device information, CPU and GPU usage, heat measurements and fan controls. There’s also GameFirst IV, which lets you prioritize which applications get access to your network, and Sonic Studio III for audio controls.

But there’s a lot of junk. Asus added Netflix, a trial of McAfee Security and its WPS Writer, Presentation and Spreadsheets software, as well as LinkedIn. A link to the Oculus setup page isn’t offensive, but it’s a waste of space in the Start Menu.

Asus sells the Strix with a one-year warranty.

For an esports machine, the base model should be plenty. In fact, the overclocked Core i7-8700K is overkill for Overwatch, Fortnite and Rocket League. If Asus sold it with a cheaper CPU, it would still have more than enough power for most esports, with a much lower price tag. The higher configurations are better for gamers who crave intensive VR experiences and play games on the highest settings and resolutions.

The Asus ROG Strix GL12 is an esports-ready machine with an attractive chassis, lots of easily accessible ports, strong performance and a hot-swappable SSD bay.

But the Strix is weighed down by lots of bloatware. And we would have preferred, even with 8GB of RAM in the starting configuration, that it come in a dual-channel pair. At $1,449, it’s pricey for esports. If you’re willing to give up the overclocked CPU, you can get the XPS Tower with 16GB of RAM (that’s the minimum) and otherwise the same specs for $1,299. For $1,399 you could even upgrade to a GTX 1070, and it’d still be cheaper than the base Strix.

But if the hot-swappable SSD will make your gaming more convenient and you want an attractive design with customizable lights, the ROG Strix GL12 may be worth paying a bit extra.