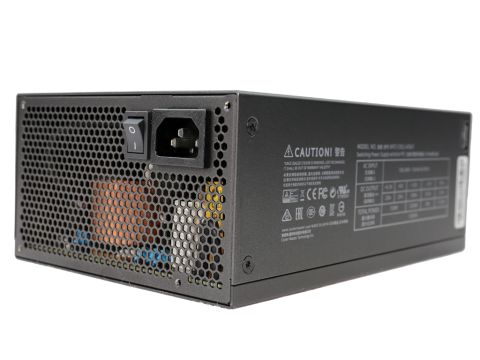 Before proceeding with this page, we strongly encourage you to a look at our PSUs 101 article, which provides valuable information about PSUs and their operation, allowing you to better understand the components we're about to discuss. Our main tools for disassembling PSUs are a Thermaltronics soldering and rework station and a Hakko FR-300 desoldering gun. Finally, for the identification of tiny parts we use an Andonstar HDMI digital microscope.

Murata's platform surely stands out from the crowd, even though it doesn't include any digital controllers. Unique APFC chokes easily catch our attention on the primary side. The design is very clean, and the components on the main PCB have plenty of clearance between them. This helps improve airflow so that the fan doesn't have to work as hard. A huge bus bar on the secondary side transfers power to the modular PCB through several thick and really short power wires, which are EMI-shielded by three ferrite chokes responsible for suppressing high-frequency noise.

The first part of the transient filter only includes a couple of Y caps. The insulators on the power wires are impressive, and we appreciate the fact that spade terminals are used instead of soldering. The EMI filter continues on the main PCB with two CM chokes, four Y caps, four X ones, and an MOV. There's also a CAP200DG on the main PCB's solder side, which isolates the X caps' bleeding resistors once power is connected, reducing energy losses.

The single rectifier bridge (Shindengen D25XB60) might be powerful, but without a heat sink it can only handle up to 3.5A at 25°. Consequently, we're pretty sure that the MasterWatt Maker 1200 MIJ utilizes another way to rectify incoming AC voltage. This bridge, specifically, is used by the 5VSB circuit.

The interleaved PFC uses two chokes that look strange. According to our sources, this is a special design allowing for higher efficiency. In total, four Infineon IPA65R045C7 FETs are used here, along with a couple of SiC SCS220AM boost diodes. Finally, the bulk caps are two Chemi-Cons (420V, 830uF & 650uF - 1450uF combined, 2000h @ 105°C, KMW) with enough capacity to provide a long hold-up time.

There is a large NTC thermistor for inrush current protection, and the bypass relay is quite loud.

This board hosts the Texas Instruments UCC28070 PFC controller and the 5VSB regulation circuit. Besides the UCC28070, we also find a Texas Instruments TPS54332 buck converter and an undocumented 2A16815 IC on its solder side.

The main transformer uses a unique design, and it's installed very close to the +12V FETs for lower power losses. In the second photo above, you can see the resonant tank.

Besides transferring power to the modular board, the +12V bus-bar also helps cool the FETs that regulate this rail. Several polymer filtering caps are used for ripple filtering.

This board hosts the voltage regulation modules responsible for generating the minor rails. Two Toshiba TPHR9003NL FETs are used, along with a single TPS40101 buck controller. Right before this board we find a fuse, providing an extra protection layer.

Besides the FETs and buck controller, we also find the resonant controller, an On Semiconductors NCP1399 IC, on the VRM board's solder side.

The 5VSB board uses a Fairchild FQPF 8N80C FET along with a Mospec MBRF20100 SBR. There is a fuse on this board, bringing the power supply's total to three. Normally, we only find one fuse in most PSUs, located in the second part of the EMI filter.

Besides the usual Japanese-made caps, we also find a single polymer one from an unknown manufacturer.

A large number of Rubycon ZLH electrolytic caps is located on the modular board's front side. They're high-quality capacitors rated between 6000 to 10,000 hours, depending on the size.

The soldering quality is impeccable. We would accept anything less from such an expensive PSU manufactured on a Japanese production line.

The solder side of the main PCB has many interesting parts installed on it, including two MCUs (Microchip PIC24FJ64 and PIC24FJ32GA), a TPS54231 step-down converter, two BSZ065N03LS FETs, a CMOS Logic Shifter (On Semiconductor MC74VHCT50A), and the transient filter's CAP200DG.

We encountered this fan when we reviewed Cooler Master's plain MasterWatt Maker 1200, and we didn't have any problems operating it on our test bench. However, this specific implementation seems to use a different PWM circuit that's incompatible with every device we tried. It only works with the PSU's controller and nothing else, so we aren't able to take noise measurements. Even monitoring the fan's rotation speed is tricky, requiring us to use a special logger.