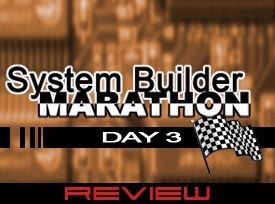 Upgrading To First Class…On The Cheap

Here are links to each of the four articles in this month’s System Builder Marathon (we’ll update them as each story is published).

Intel’s Core i7 release schedule forced us to omit the high-priced configuration from November’s System Builder Marathon (SBM), but the intermission gave us time to reevaluate our priorities. With a price of over $4,000, our previous elite-performance systems had become too costly for most enthusiast builders, let alone everyday value-seekers. And so we listened to your comments and dialed our highest-end configuration down a couple of notches.

A better-balanced approach was sought for this month’s SBM, with a high-end budget that would appeal to former $5,000 system builders who, given the realities of today’s economy, might have otherwise looked for an excuse to delay discretionary spending. Manufacturers have obliged with reduced-price versions of their highest-end components, while sellers are cutting deeper into profit margins simply to maintain market share. With a little effort, we’re hoping today’s $2,500 system can leave October’s $4,500 PC as a distant memory of money needlessly squandered.

A quick look at its components reveals that our $2,500 system does away with an "overpriced" liquid cooling system found in previous high-end builds, but when it comes to overclocking, extra cooling is often money well spent. We definitely would have chosen high-value liquid cooling components if any well-priced Core i7 water blocks had been available.

Also notice that our $2,500 component list has already dropped by over 7% in the two weeks it took us to build and test the system. This bonus value could be spent in many ways or saved for use in future upgrades.