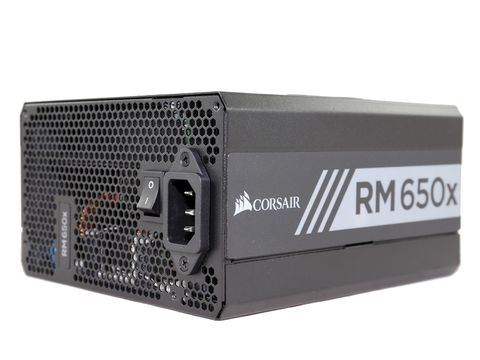 The efficiency sweet spot is between 160W and 460W, with the load on the minor rails below 70W. If you need higher efficiency, then you should spend more money on a good Platinum- or Titanium-rated power supply.

The internal temperatures are normal, despite the prolonged passive operation and low fan speed at moderate ambient temperatures, even under high loads. Only the bridge rectifier exceeds 100 °C during the end of our cross-load tests. According to its spec sheet, that component can provide 15A at 100 °C, given that it is mounted on a heat sink. At 125 °C, its amperage-handling capability drops to half (7.5A), which translates to 862.5W with 115V input or 825W with 110V. Considering the PSU's high OPP trigger point, and taking into account ambient temperatures of 35 °C or higher in some enclosures, Corsair should probably use an additional bridge rectifier in parallel with the current one, splitting the load between them.