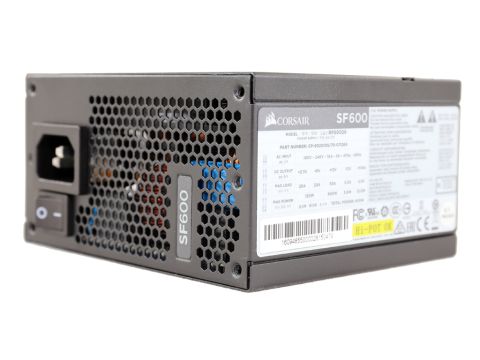 The following graph quantifies the total performance rating, comparing Corsair's unit to other PSUs we've reviewed. To be more specific, the SF600 is shown as 100 percent, and every other unit's performance is shown relative to it.

Sporting high performance, the compact SF600 easily matches high-end ATX PSUs with similar capacities. As you can see from the graph above, the competing SilverStone SX600-G is left way behind.

The following chart may be the most interesting to many of you because it depicts the SF600's performance-per-dollar score. We looked up the current price of each PSU on popular online shops and used those figures (along with relative performance data) to calculate the index. If the specific unit wasn't available in the United States, we searched for it in popular European Union shops, converting the listed price to USD (without VAT). Note that all of the numbers in the following graph are normalized by the rated power of each PSU.

SFX PSUs are expensive, so it's tough for Corsair to compete in a measure of value.

We expected quieter operation, similar to what we heard from the SF450. However, Corsair decided to tune its fan profile more aggressively, leading to increased noise when the PSU is taxed (update 5/2/2016: According to Corsair's PSU PM, the fan profile of the SF600 should be much more relaxed. We are expecting for a second sample to confirm this). Delivering 600W from a compact platform isn't easy, and without adequate cooling reliability can be compromised. But given the SF600's efficiency numbers, we believe that a more relaxed fan profile could be offered.

The SF600's overall efficiency is a tad lower than the SF450's. It's still high though, beating all of the other Gold-rated PSUs we used for comparison purposes.

Prev Page Ripple Measurements Next Page Pros, Cons And Final Verdict
38 Comments Comment from the forums
Be In the Know