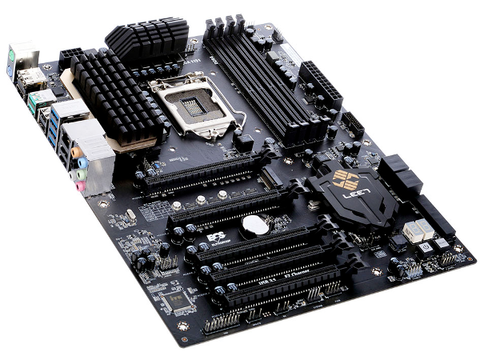 ECS wasn’t able to deliver the latest version of its software suite, but the motherboard web page shows that it will include eBLU (BIOS update), eDLU (driver update), eOC (basic overclocking), and eSF (fan control) software as described in our Z79-Machine review.

Z170-Claymore firmware opens to a friendly page for visually-impaired non-overclockers, with a few power profiles and a row of storage device icons that can be re-arranged to alter boot order.

Switching to advanced mode, we find the Motherboard Intelligent BIOS X menu with a group of sub-menus for CPU, DRAM, Voltage and overclocking profile storage. The latter of which helps users save settings they know work, while pursuing those that might not work.

There aren’t many overclocks that don’t cause power-based clock throttling, as the higher voltage required to push high CPU clocks doesn’t pair nicely with an eight-thread AVX-optimized workload. Our CPU was able to reach 4.4 GHz without throttling, but only after reducing its core voltage.

The Z170-Claymore only allows manual manipulation of timings after selecting “Manual” mode, but it does retain the settings from the previous chosen mode. In other words, switching from Auto with CAS 15 to Manual allows the user to start with the original CAS 15 settings, and switching from XMP CAS 17 to Manual allows the user to start with those CAS 17 settings. Yet we were still unable to do either of these, as the board would continuously put “zeros” in several fields whenever we made the switch. Changing the “zero” values didn’t solve the problem, as hidden (inaccessible) timings were also zeroed out. It appears that this particular memory confuses this particular firmware revision, and that builders will either need to change their memory or wait for a new firmware before any of these settings work.

After nearly two days of unsuccessful attempts to make any changes to memory frequency or timings, it was time to move on.

A core voltage setting of 1.265V was the tripping point for core voltage and current overload protection, at least at clock rates beyond 4.40 GHz. Lower clocks allowed higher voltage to be used, but the point of overclocking is to reach higher clocks. Tuners who would like to try a higher clock rate in 1-2 core loads and a lower clock rate at 3-4 core loads can do so by setting the appropriate multipliers, which could help the board reach higher frequencies at lower levels of CPU stress.