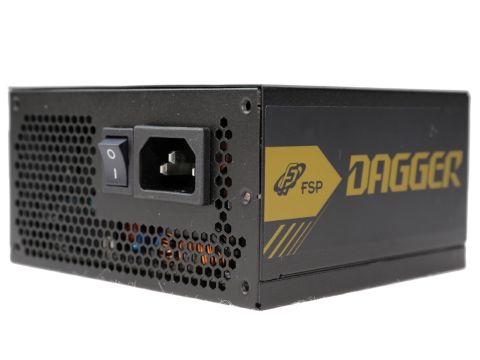 The SDA600 has high power density and uses a fully modular cable design. Its key feature is the silent operation, despite of the strong 80mm DBB fan that it is equipped with. With a proper operating 3.3V rail its overall performance would be much better.

FSP isn't new in the SFX market; we've seen several of its platforms used by brands like be quiet! and SilverStone. The company's newest addition to this segment is the Dagger line, consisting of two members featuring 500W and 600W capacity. Today's review focuses on the family's flagship, FSP's SDA600. Both Dagger units are 80 PLUS Gold-certified, fully modular, equipped with almost all of the protection features we expect (UVP seems to be missing), and armed with a single +12V rail. PSUs with multiple +12V rails might be safer under extreme conditions, but power supplies with one +12V rail dominate the market because they simplify installation. They're also more overclocking-friendly. Multi-rail implementations can lead to unwanted shutdowns if OCP is triggered.

According to FSP, both Dagger PSUs are VR-ready, meaning that despite their compact form factors, they're still able to drive gaming PCs fast enough for modern HMDs. The platform that these units use is modern, since it employs an LLC resonant converter for increased efficiency. To make it more reliable, FSP only uses Japanese capacitors, which tend to last longer than Chinese caps.

As mentioned, the SDA600 is 80 PLUS Gold-rated. It's naturally compatible with the newest Intel sleep states as well, since it uses DC-DC converters for generating the minor rails. The protection feature set is nearly complete; only under-voltage protection seems to be missing. Thankfully, over-temperature protection is supported. We consider this to be one of the most important protection features available.

In Cybenetics' efficiency program, the PSU scores an ETA-A- rating, while the lab's corresponding noise rating is LAMBDA-A, denoting that this is a particularly quiet PSU, despite its compact form factor and 80mm cooling fan.

It would have been nicer to see FSP use a 92mm fan spinning at a lower RPM. However, with a proper profile, even an 80mm fan can offer quiet operation. Because of the SDA600's small dimensions, it's predisposed to higher operating temperatures. As a result, it makes sense that there's no semi-passive mode. We don't have a problem with this, so long as the fan spins slowly enough under light and moderate loads.

Bucking the trend that says PSU fans have to use fluid/hydro dynamic bearings, FSP opts for a double ball-bearing fan that may make more noise than the others, but is still considered highly reliable.

The minor rails are limited to 90W, but no modern system should need more than that unless it's loaded with two dozen hard drives. On the contrary, the +12V rail is quite strong given this unit's small dimensions, and it will easily meet the demands of a high-end GPU. For a decent VR experience, you need an Nvidia GeForce GTX 970 or 1060. The SDA600 has no trouble there, or with any of the higher-end Pascal-based cards.

The SDA600 is fully modular. It includes two auxiliary PCIe connectors, which you'll need for any potent graphics card. The only let-down is a single EPS connector. Still, that's ample for most mini-ITX or other small form factor motherboards. If you're using a high-end ATX platform with the SDA600, you're more likely to miss a second EPS connector.

The number of SATA and four-pin peripheral connectors is low. Remember, though, that this is an SFX-based PSU designed to be used in small enclosures where internal space limits expansion.

The length of the provided cables is adequate for an SFX PSU, and the distance between connectors is satisfactory as well. Finally, mostly 18-gauge wires are used. The only exceptions are the sense wires and FDD connector, which use thinner 22-gauge wires.

Next Page Packaging, Contents, Exterior & Cabling
2 Comments Comment from the forums
Be In the Know