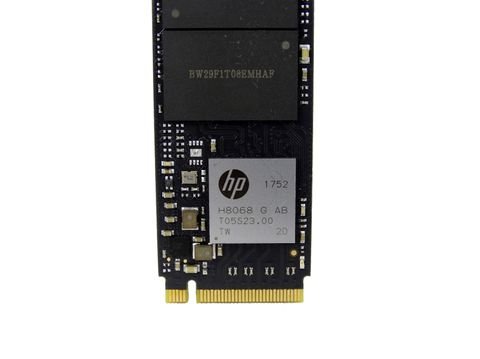 The HP EX900 passes very strict quality control standards and is guaranteed to work seamlessly in HP products. It's a good upgrade path for those looking to add NVMe performance to a system, but the price has to be right. At the time of writing, the 500GB EX900 carries a heftier price tag than it should.

We recently reviewed the HP EX920 high-performance NVMe SSD that has a great balance of performance and cost, but both are still too high to entice budget shoppers to move to the M.2 NVMe standard. HP's new EX900 is like the carrot on a string in front of the budget donkeys.

The HP EX900 uses the Silicon Motion SM2263XT DRAM-less NVMe controller with Host Memory Buffer (HMB) technology. There are a few buzzwords in that sentence that we explain in our SM2263XT controller preview article, but we'll hit the broad strokes a bit later.

These new SSDs are designed to replace your existing SATA SSD with a faster NVMe model. We'll see how that works out and if you should spend a little more to get the top shelf experience.

The HP EX900 entry-level NVMe SSD comes to market in 120GB, 250GB, and 500GB capacities. There isn't a 1TB option, but DRAMless 1TB SSDs suffer from degraded performance in higher capacities, so you aren't missing much.

The basic features of the SM2263XT controller carry over to the EX900 and many other products that use the same controller. Many of the features have become standard across the industry, or at least very common. For instance, entry-level SSDs almost exclusively utilize four channels to the flash and advanced low-density parity check ECC (error correction code).

Flash-based devices do not place the data where the operating system requests because they need to spread wear evenly across the NAND. Essentially, the SSD has two maps of the LBA addresses: the logical map where the host "thinks" it is placing data and the physical map of where the SSD actually places the data. The SSD uses the translation table to find the stored data when the operating system issues read or write requests.

That process relies heavily on speedy DRAM, but memory is expensive. HMB technology allows SSD manufacturers to remove the DRAM on the SSD and use a small amount of your system memory (RAM) to achieve similar results. In general, a 512GB SSD will consume 512MB of system memory, but the dynamic cache grows based on the amount of data stored on the SSD. The amount of data used by HMB is a pittance compared to the amount of RAM in a typical system. It's an invisible process, but there are some limitations; it only works on Linux and post-Creator's Update Windows 10 versions. The technology does not work on Windows 8 or older operating systems.

The EX900 adds to the standard feature list through extensive compatibility testing and firmware tuning for HP devices. The EX900 also works in other branded computers as well as DIY home builds, but compatibility is only guaranteed with HP products that support the NVMe protocol. That means it won't work in your ten-year-old desktop that doesn't support PCI Express. You'll have to use common sense when choosing to upgrade an existing computer.

The endurance ratings are also weak. The 120GB model starts us out at 70TB of write endurance, but unlike competing SSDs, endurance doesn't increase linearly with capacity. The EX900 carries a three-year warranty.

The HP SX900 package is like the EX920 we already reviewed. HP lists some of the features but doesn't include performance specifications or details on host memory buffer technology. This is an area we would like to see HP improve, but the company isn't known for flaunting speeds and feeds.

The EX900 NVMe SSD is fairly straightforward. The controller is close to the M.2 connector, and because there isn't a DRAM package, HP can cram four NAND packages into the single-sided M.2 2280 S3 form factor.