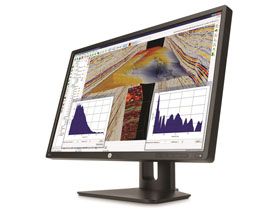 The Z27q's off-axis performance is typical of modern IPS panels. Viewing the image at 45 degrees to the side results in a moderate light falloff and a slight color shift to green and red. The same is true when viewed from the top down. Detail is well-preserved even in the darkest steps so image integrity should be acceptable to viewers not sitting in the center seat.

In the ANSI contrast test we noted two hotspots in the upper-left and lower-right corners. Those same areas affect the Z27q's black field uniformity. 13.77 percent isn't a bad result but other screens score better. In practice it doesn't qualify as true light bleed but in a dark environment you can just make out the extra brightness in those two corners.

The white field result is considerably better with no visible issues whatsoever. In fact, once the field patterns exceed 10 percent those hotspots we mentioned become completely invisible. The Z27q doesn't include any uniformity compensation but we'd say given the performance of our sample, it's not needed.

Color uniformity is equally competent and exhibits no visible tinting anywhere on the screen. Smooth tones are all you'll see at every brightness level including the 80 percent mark we test at.

Panel response is quicker than we'd expect given the high pixel count. We don't expect to see much gaming on this monitor at its native resolution, but full-motion video exhibits far less motion blur than many other displays.

Input lag is also quite impressive. We credit some of that to the AMD FirePro graphics card but this is a pretty snappy panel considering how much processing is going on. It's one of the faster IPS screens we've tested at any resolution.