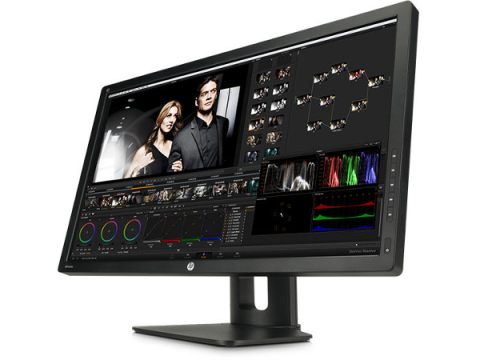 To read about our monitor tests in-depth, please read Display Testing Explained: How We Test Monitors and TVs. Brightness and Contrast testing is covered on page two.

Today’s comparison group consists of wide-gamut screens only. We have Dell’s two 4K models, the UP3214Q and UP2414Q; NEC’s excellent PA272W; Viewsonic’s VP2772; and BenQ’s PG2401PT. All of them are professional-grade products that come with a factory-documented calibration.

HP rates the Z27x at 250 cd/m2 in its calibrated modes and we got readings around 260 cd/m2 in all of them. To reach the panel’s maximum output of 313.2169 cd/m2, you have to use the Native mode, though. Its color gamut is close to Adobe RGB anyway, so you could use the monitor that way if you needed it in a high ambient light situation like a location shoot. For the display’s intended use, however, 260 cd/m2 is more than enough brightness.

The maximum black level is quite respectable at .2948 cd/m2. While accuracy is the principle goal of this product, HP hasn’t forgotten the importance of a wide dynamic range and high contrast.

A measurement of 1062.3 to 1 is over our standard of 1000 to 1, making HP the top performer. It doesn’t get much better in the IPS computer monitor world. One hope we have for future improvement is VA technology, which more than doubled the above results when we tested BenQ's BL3200PT. Combining that level of contrast with the Z27x’s accuracy would make for a killer display.

Dropping the Z27x’s backlight to its minimum setting yielded 54.8765 cd/m2 output. That's a great light level for working in the almost total darkness of a CGI artist’s editing station.

The top four screens all have correspondingly lower minimum white levels, so these results are no surprise. The PA272W bottoms out at a dim 19.8634 cd/m2; its minimum black level would be tough to work with.

Ultimately, the greatest impact on image quality comes from contrast and the HP maintains its lead in our group of elite screens. Our hands-on use of the Z27x confirms that all kinds of content reap the benefit of its wide dynamic range. There is plenty of depth and dimension in whatever you’re looking at.

After Calibration to 200 cd/m2

Here’s what black levels and contrast look like after calibration with the max output set at 200 cd/m2:

We calibrated the Z27x using HP’s DreamColor solution, which is a modified i1Display colorimeter. The adjustments it made to the factory configuration were minimal, so the numbers are almost unchanged. The black level is still impressive, though.

NEC just edges out the Z27x, but the difference is small enough that you probably wouldn’t see it in a side-by-side comparison. Given the luminance results, we can say that HP boasts contrast performance better than almost all of its competitors.

The Z27x regains its top spot. When the ANSI number is this close to the on/off value, we know the grid polarizer is of very high quality. HP’s custom part appears to improve contrast as well as off-axis image integrity.

Prev Page OSD Setup And Calibration Of The HP Z27x Next Page Results: Grayscale Tracking And Gamma Response
6 Comments Comment from the forums
Be In the Know