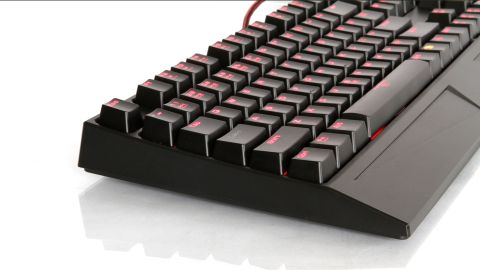 Although the MEK has an all-plastic ABS chassis, it's about as high quality-looking as plastic can get. The black finish resists fingerprints surprisingly well, and the black plastic keys perfectly match the chassis' color and look.

Gamdias employed a bowl design, wherein a top panel covers the backplate. It's not as slick as the Corsair style of mounting the switches directly to an exposed metal backplate, but Gamdias made the most of it. The top panel is one solid piece of plastic and extends out to give you a built-in wrist rest. (The downside is that if you don't want a wrist rest, you're stuck.)

In the upper right corner of the keyboard is a molded black plastic "iBuyPower" logo that looks a little cheap. One wonders how much it would "pop" if instead that logo was laser-etched and backlit.

There are no additional ports on the MEK, leaving the sides solid. Underneath though, Gamdias built a three-way routing trough for the braided red-and-black cable. Unlike some other keyboard designs that let you route the cable directly out the back or way off to either side, the MEK's three routes are all just a few inches apart. There's one directly in the center of the keyboard, and the other two are just a few inches to the right and left, respectively. This certainly affords you some flexibility for where your USB cable lines up on your desk, but fundamentally I'd prefer that the left and right troughs were closer to the edges of the keyboard. It appears that Gamdias cut the troughs short so they wouldn't run into the flip-up feet, but a better thought-out design would accommodate both, as on the Nixeus Moda V2 and Razer BlackWidow X Chroma. (A minor detail, I allow.)

Like most keyboards, the switches on the MEK are ABS plastic with laser etching, and they're slightly concave. The large, wide font on the keys is not especially elegant, but it certainly contributes to readability.

Further, the LEDs seem to have rather uneven light spreading. Even in a bright room, you can clearly see points of light peeking out from under the key caps. In a darkened room, it's even more pronounced. I believe that Gamdias attempted to boost the lighting by employing a shiny black metal backplate, which would reflect the light. A top panel design like the MEK uses can sometimes help to reflect light back down onto the backplate. The design choices seem to have backfired.

One particularly odd choice is that there's a single key that is backlit by a color other than red. The Windows key is emblazoned with an orange-lit iBuyPower logo. Yes, orange. Every key is red except for one clashing orange key. I understand the logic: You want the logo to stand out, and the Windows key is a great place to put it. It's also an important key you want to locate easily with your peripheral vision, but the execution is unfortunate.

On an RGB keyboard, it's a simple remedy to program any offending key to a different color, but the MEK offers only red (er, and orange, I guess, if you count the lone key).

There are just a few lighting effects you can employ. You can choose from three brightness levels (30, 60 and 100 percent), turn the lights off entirely, or set a breathing effect. This is all controllable with key events (Fn+8 on the numpad, Fn+2 on the numpad), or you can do it through the Hera software (more on than it a bit). You can set the breathing cycle to four, six or eight seconds.

A final, and somewhat seizure-inducing, lighting feature is Responsive Lighting. With that box ticked in the software, the lights will kick on only when you type. No matter what you do though, the Print Screen key remains lit.

Gamdias/iBuyPower went with TTC Red switches for the Hermes Lite/MEK—a bold decision, considering the industry perception that anything-but-Cherry is inferior—but I found nothing negative to say about the TTC switches. They're light but springy, and gun to my head, I couldn't tell them apart from Cherry Reds. As you can see in the table below, this is likely because the specifications for the two are strikingly similar, including the required actuation force.