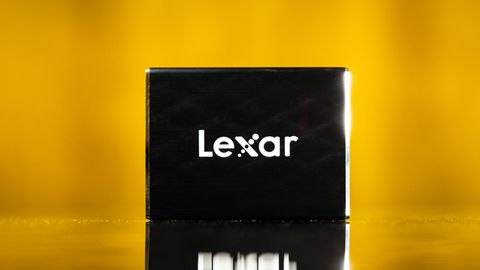 In today’s review, we'll be pitting the SL100 Pro against a few other external SSDs and HDDs that we have recently tested. Powered by HDDs, we’ve included the 2TB LaCie Mobile Drive and 4TB Rugged RAID Pro. Stepping things up, we added in the 1TB SanDisk Extreme Portable SSD and 480GB Kingston HyperX Savage EXO, which both deliver SATA SSD performance over USB. As well, we’ve included some Thunderbolt-based competition to heat things up a bit: a 1TB G-Technology G-Drive mobile Pro and 1TB Samsung X5, both high-end (and expensive) Thunderbolt 3 devices.

Lexar’s SL100 Pro rips through our test files with ease. It ranks third overall, behind our two Thunderbolt 3 comparison devices. In our real-world file write transfer tests, the photos folder wrote the fastest at 971 MB/s and read the fastest of 886 MB/s with the 3.7GB read file. Looking at things time-wise, the Lexar drive offers a significant advantage over the HDDs and a decent improvement in performance over the HyperX Savage EXO and SanDisk Extreme in every task.

In PCMark 8, the SL100 Pro pulls in a score of 4,945 points and achieved an average bandwidth of 223MB/s. While significantly faster in sequential tasks like large file reading and writing over SATA based USB devices, random performance seems to be rather similar in applications. And, as you can see, it is significantly faster than any HDD.

Lexar’s SL100 Pro hits top speeds of 1,076/923 MBps read and write in ATTO. This beats the manufacturer's ratings, which is always nice to see.

At a queue depth of one, the Lexar SL100 Pro’s 4KB random read latency is double that of its competitors, which results in about half of the IOPS delivery. Overall, its random performance lags behind the other NVMe and SATA SSD based competitors on average from queue depths 1-4. This is probably why we saw a slightly lower score than that of the SanDisk’s. And, just as we saw in ATTO, it ranks in third place in sequential performance, hitting peak speeds of 918/898 MBps, respectively.

Write speed and temperature are two important and inter-related metrics for external devices. We threw in this one last test to measure the performance of the drive over a 15-minute window, writing to the full span of the drive. When possible, we also log the temperature of the drive via the S.M.A.R.T. data to see when (or if) thermal throttling kicks in and how it impacts performance. This test also reveals if the drive has a pseudo-SLC cache, which is a small portion of faster-programmed flash that absorbs incoming write workloads. Bear in mind that results will vary based on the workload and ambient air temperature.

Write performance for the Lexar drive was looking pretty solid, until we performed this test. Here we find that the SL100 Pro features a large and dynamic pseudo-SLC write cache. From empty, the cache seems to function pretty well. Up to the five-minute mark, it absorbed double the amount of data as the SanDisk Extreme. After that, however, it started slowing down until it ultimately wrote at a rate of just 180 MB/s due to its DRAMless design.

We were unable to log the S.M.A.R.T. data while writing data, but we still caught a few updates throughout testing. At most, our temperature readings were reporting ~55 degrees C and the unit was just warm to the touch.

Prev Page NVMe over USB, but at what cost? Next Page Conclusion
No comments yet Comment from the forums
Be In the Know