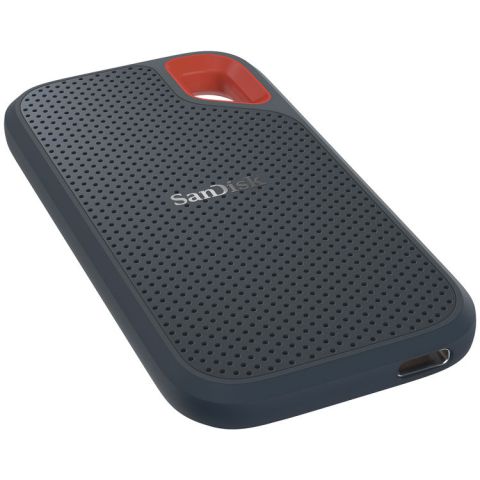 SanDisk leveraged its new 3D flash technology to produce a stylish high-speed portable storage device targeted at photographers on the go. The new Extreme Portable SSD is IP55 rated for splash and dust resistance, but the USB 3.1 Gen chip inside also gives you access to speedy transfer speeds while maximizing compatibility across platforms. The 2018 Extreme Portable SSD has a new stylish case design that is more attractive than the perforated matte finish the company used in the past.

We've tested several SanDisk portable SSDs, and while our results have been positive with several models, one previous-gen product fell short of our expectations. The disappointing Extreme Portable SSD 510 suffered from its planar 3-bit per cell (TLC) flash combined with a small SLC buffer that slowed large file transfers to the drive. SanDisk would like to forget that previous-gen model, and the company took steps to make that happen.

As with all SSDs, its what's inside that counts. The 2018 Extreme Portable SSD uses BiCS FLASH, which is the brand name for the company's vertically layered 3D flash that offers increased performance and endurance. The new flash boosts sustained write performance, so your multimedia files move to the drive much faster than before. Not only is this the fastest non-RAID portable SSD from SanDisk, but it is also one of the best models on the market.

The SanDisk website only lists the Extreme Portable SSD in three capacities that range from 250GB to 1TB, but online retailer B&H also lists a massive 2TB model that is already shipping.

The SanDisk Extreme Portable SSD supports the USB 3.1 Gen 2 protocol and sports a USB Type-C connector that delivers up to 550 MB/s of sequential read throughput. The company doesn't list sequential or random write performance specifications on its website or data sheets, but the company did give us a basic "up to" 550 MB/s sequential read rating. SanDisk also doesn't list any endurance figures, either.

SanDisk markets this products' features rather than its performance. For instance, the company highlights the 1500 G shock and 5 gRMS (at 10-2000Hz) vibration ratings. The drive sports an IP55 rating for dust and water protection. Other features include a wide operating temperature range of 32 to 113 degrees Fahrenheit and passive storage temperatures that range from -4 to 158 degrees Fahrenheit.

SanDisk's drive definitely falls into the rugged category: The new drive can withstand a fall on concrete from 6.5 feet, which is much better than my Note 8 that cracked after I dropped it 15 inches. These are all peace of mind features, but most of these ingredients are common across the constellation of rugged SSD products that come from a wide range of companies.

Our drive arrived pre-formatted in exFAT for maximum compatibility across platforms (Windows and MAC). We suggest formatting the drive to NTFS if you plan only to use the drive in a Windows environment. This enables the TRIM feature to keep performance high by wiping previously-deleted data from the drive. Over the long term, this will improve performance and your overall experience.

The SanDisk Extreme Portable SSD starts at a very palatable $99.99 for 250GB of storage, while the 500GB retails for $153.99. Currently, the 1TB model sells for $349.00, which is a sizable jump over the 500GB drive. We also found the massive 2TB Extreme Portable at B&H Photo/Video for $699.00, but SanDisk's website doesn't mention the capacious model. Instead, the company lists capacities between 250GB and 1TB. The 2TB drive is a welcome addition if you can stomach the hefty price.

All four models ship with the same three-year warranty, which is in line with many of the latest portable SSDs we've tested. Considering the similar pricing, the Extreme Portable competes with the Samsung T5 Portable SSD series.

The 2018 SanDisk Extreme Portable SSD ships with a paper manual, short USB Type-C to Type-C cable, and an adapter that converts Type-C into a Type-A connector. The adapter is very handy and much easier to travel with than an additional cable.

SanDisk Secure Access 3.0 software ships with the drive. The software allows you to create a password-protected folder to secure files from prying eyes. You can read more about the software, and even download it, from the SanDisk website here.

The drive looks really good. The perforated top is cosmetic, so it doesn't help dissipate heat. In either case, that wouldn't make sense given the IP55 rating for dust and water protection. The single IO port comes in the form of a USB Type-C connector that gives you access to the extra 50 MB/s of bandwidth that's not available on a USB 3.1 Gen 1 drive. The extra performance comes from the Gen 2 specification that doubles throughput.

Next Page Performance Testing & Conclusion
5 Comments Comment from the forums