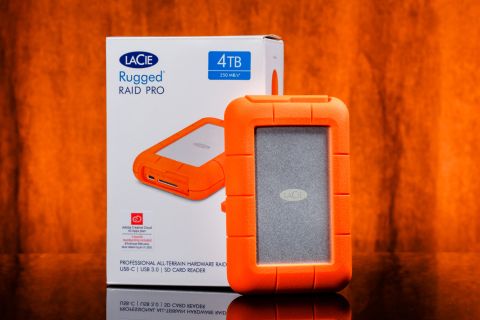 LaCie’s Rugged RAID Pro is a top-notch external HDD that puts most others to shame. It’s built to take on the elements, has an integrated UHS-II SC card reader, and comes with a data recovery protection plan.

LaCie’s Rugged RAID Pro is a fast external HDD designed for the mobile pro. The two internal 2.5” HDDs can reach speeds of 250MB/s of read/write performance in RAID 0, but the drive is also designed to take a beating and handle the weather almost anywhere you go. While it is on the pricey side, this LaCie product buys you peace of mind because the Rugged RAID Pro also includes a free data recovery service during its three-year warranty. In all, it’s a pretty unique drive with rugged protection for demanding environments.

Life as a video producer or photographer can quickly turn into the life of a data storage nut. At least that’s how I started. What once started as a simple hobby of trying to capture the moments and memories around me quickly turned into mental torture when it came to managing my data and backing up my thousands of RAW images and rather large video files. For a while, I didn’t even have a backup at all, eventually losing over 700GB of video forever due to a drive failure. If I had stored it on the LaCie Rugged RAID Pro, that story could have ended on a more positive note.

At $289.98, LaCie’s Rugged RAID Pro is quite expensive, but it is a nice external storage device for the creative professional. It’s built to take a drop up to 4ft/1.2m while in non-operating mode and can handle the elements fairly well given its IP54 rating. But what really stands out is that this bright orange and silver external USB-C HDD features two internal HDDs and an onboard RAID controller for added speed as well as an integrated SD card slot.

The device ships configured in RAID 0 and is preformatted with the exFAT filesystem with 3,726GB of user addressable space, so it is compatible with both MacOS and Windows out of the box. While it isn’t as fast as SSD storage, the RAID 0 implementation stripes the data to each drive and delivers upwards of 250MB/s of sequential read/write throughput, which is good enough for 4K video editing.

If speed isn’t as much a concern as data security, you can also configure the device to operate in RAID 1 mode instead. Basically, this setting duplicates the stored data onto both internal HDDs. This results in slower performance and just 2TB of capacity (1,863GB usable), but redundancy can be more important than speed. However, you shouldn’t use RAID 1 in place of a proper backup routine, for which you should use an entirely separate device.

Finally, you can also use both drives independently of one another by configuring the device as a JBOD (Just a Bunch of Disks), and thus both internal HDDs will appear as separate volumes to the host system.

In the box, you get LaCie’s Rugged RAID Pro, a USB-C to USB-C cable, USB-C to USB-A cable, two removable port covers, a power supply with adapters, and quick install guide.

Changing RAID modes is rather simple on the Rugged RAID Pro. After you’ve installed the LaCie Toolkit (included on the drive from the factory) and installed the RAID Manager (a download) and launched it, just change the device into the RAID mode you would like. You will have to confirm the change by using a paperclip (or similar) to press a small button on the device. That helps to prevent data loss from accidental mode changes.

You can use the Toolkit to format the device, too, letting it optimize the disk format for the specific operating system you are using (it defaults to NTFS for Windows or HFS+ for MacOS). Additionally, Toolkit can be used to manage backup plans (Windows only), create mirror folders, and automate memory card imports directly to the device.

LaCie also includes a month of membership to the Adobe Creative Cloud All Apps plan, which enables you to use all of Adobe's Creative Cloud applications for free, a $79.49 value.

And as a final value add, the most valuable one of all I might add, is a free subscription to Seagate’s Rescue Data Recovery Services throughout the drives' three-year warranty. If a product could potentially save a customer thousands of dollars on data recovery, what could be better? Nothing says confidence in a product like that, especially to a creative pro where their data is their income.

The LaCie Rugged RAID Pro measures 140 x 91 x 30 mm and weighs at 0.446kg (0.981lbs.). For added drop protection and resistance to the elements, it features LaCie’s signature rugged drive orange rubber sleeve around it, which is removable. Within the sleeve is an aluminum housing with plastic end caps.

All ports and status lights are located on the same face under the removable rubber cover. There is also a built-in UHS-II SD card slot, which is a nice bonus and allows you to back up SD cards directly to the device. It works as a normal card reader as well.

The drive has two indicator lights. A large one indicates the drive is working, and a small one that, if blinking, indicates if the device needs power from the external power brick. From testing, it seems all my USB 3.1 Gen1 ports couldn’t supply enough juice to the device, but the USB 3.1 Gen 2 (specifically the Type C port, but not the Type A port) and Thunderbolt 3 ports were able to power it up without having to use the external power brick.

You can disassemble the drive with a screwdriver, but it will obviously invalidate the warranty if you break any warranty seals. After disassembly, we can see that the Rugged RAID Pro is comprised of five main pieces within the aluminum case: an internal chassis, a USB/RAID controller board, a small daughter board with three SATA data/power connectors, and two 2TB Seagate Mobile HDDs. The device uses normal SATA connectors, so there is a possibility that you could swap out the HDDs for something in the SSD flavor later on.

The device uses two ASMedia bridge chips for IO management. The ASM1156R is used for the RAID/JBOD configuration while the ASM1074 bridges the SATA drives into the USB 3.1 Gen 1 connection.

Next Page Performance Results
Be In the Know