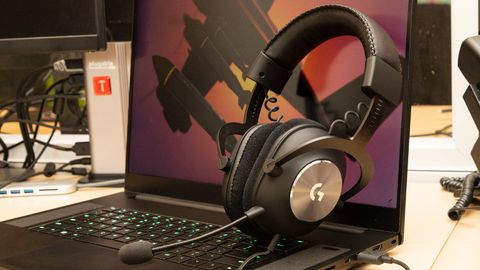 The Logitech G Pro X headset has great sound, customizable software and plenty of accessories, but you’ll pay for the luxury.

In testing the Logitech G Pro X, at $129.99, often seems like the company thought of everything. Comfort? Yeah, it’s comfortable. Would you like leatherette or velour earpads? It has both. How’s the sound? Great, with 50mm drivers. And there’s even software to make your voice as crisp and clear as possible on streams or in voice chat, as well as accessories from cables to a carrying case.

On top of that, this is a classy looking gaming headset. But the software can be complicated for newcomers and some of the software filters are odd. For many, that price tag will be too high (especially for a wired headset), but for pros looking for great sound and lots of features, the Pro X is worth taking a look at.

These aren’t your typical gaming headphones. While many competing headsets sport aggressive designs or RGB, the G Pro X’s design is both premium and sophisticated. The headband is steel covered with a leatherette material with aluminum forks holding the cups. Those are all black with a silver circle featuring the Logitech G logo in the center. Light bounces off of it in a radial design, which really catches the eye. You’re definitely paying extra for premium materials here.

There are two sets of earpads included in the box. The leatherette ones come preinstalled, but Logitech includes breathable velour pads as well. Most of my testing was with the leatherette pads. The leatherette offers a better seal, but the velour is lighter and more breathable, which I preferred for longer sessions.

The G Pro X’s are snug, but not too tight, even on my head which some have suggested is slightly larger than average, and there’s plenty of room in the cups for even the biggest of ears. At 11.3 ounces (338 grams), the Pro X aren’t particularly heavy.

The condenser microphone is detachable. If you’re multiplayer gaming, streaming or in a meeting, it attaches to the left cup, but you can pop it out if you’re just listening to music, watching a movie or playing a single-player game without chatting.

The Pro X served as a great pair of headphones in gaming, music and chat. I felt I got better sound through the USB adapter rather than through the included y-splitter to connect the headset to microphone and headset jacks on a laptop or desktop.

I tried the Pro X with Hitman 2, and it performed excellently. I could hear footsteps coming from guards on the hunt, and the surround sound was great for both that and atmospheric sounds like wind whipping around a beach house. It’s strong on the low-end, too, which made bullets pop.

I also tried it listening to music, and found that Linkin Park’s “What I’ve Done” was balanced, with strong vocals, guitars and drums, as well as a thumping bass.

In calls, the boom mic was crisp, even without the Blue Voice features (see Features and Software, below), though it could occasionally catch hissing noises.

The sound in general is a bit better with the leatherette ear cups than the velour pads. The former simply form a better seal around the ear, preventing sound from leaking. But for long gaming or listening sessions, the velour ear cups were more comfortable.

The majority of the Pro X’s most interesting features are powered by Logitech’s G Hub software.

The most notable is Blue Voice (stylized as Blue VO!CE), which uses software presets and adjustable settings to make your voice as clear and crisp as you want while streaming or just playing games online.

The setup may be a bit intimidating for newbie streamers, but those more familiar with audio software for broadcasting will feel right at home. The leftmost part is the most accessible. It shows your mic levels and, with Blue Voice enabled, a series of presets. You can record your voice and it will play over and over again as you try it with each preset.

There are also more advanced options, including an adjustable EQ, a high-pass filter to remove low frequency sounds, a de-esser to prevent hissing and other high-frequency annoyances and more.

In my experience, the two broadcaster presets and the “Low voice - loud” preset both made my voice even and clear, while also wiping out some hissing in the background and a bit of office background noise behind me. Is it as good as a dedicated microphone? No, but it’s really good, considering. In chats with colleagues, they found that the difference was noticeable, though some filters, like one for an AM radio-style sound, simply annoyed them.

You can save your profiles and publish them, either publicly or for other PCs accessing your account.

There’s also an equalizer for the sound you hear in game, with presets for FPS and MOBAs, as well as a few from pro esports players.

The last big set of features are in G Hub’s acoustics tab, with sliders for volume and the microphone. But more importantly, you can turn on (or off) DTS Headphone:X 2.0 spatial surround sound.

The Logitech G Pro X costs $129.99 with a carrying case, leather and velour earpads, PC and phone cables, a PC Y splitter, and the included Blue Voice technology via the software.

For $99.99, the Logitech G Pro is the same design, but without velour earpads, Blue Voice, phone cable or 3D audio.

The Logitech G Pro X is versatile, comfortable, luxurious, even. With strong sound and every accessory and cable you could need, it doesn’t just feel like a premium product, but a premium package.

But the software involved in getting the key features running, while impressive, will definitely scare away some newcomers. If you don’t already know about microphones and audio, there’s some experimenting to do. Additionally, for some, $129.99 is a lot for a headset.

But those who give it a shot will see a luxury, professional product, especially if they already know what they’re doing with a microphone.