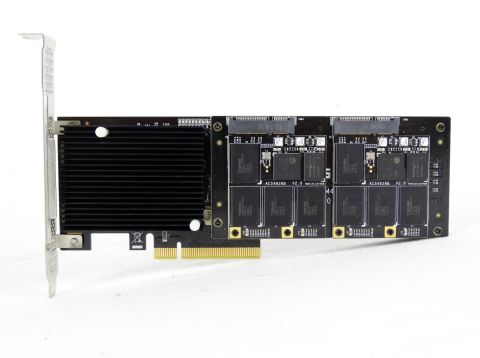 If MX Technology released the MXSSDEP3 in 2013, it would have been an interesting design. The performance would have been better than the other all-in-one RAID products on the market with SandForce controllers. Like those products, this RAID-enabled SSD is temperamental, only performs well under certain corner-case conditions, and delivers a less desirable user experience during general application workloads than a single SSD.

NVMe killed the all-in-one RAID product category, or so we thought. MX Technology, also known as Mach Xtreme, sent us a new storage device that packs the power of 2TB of flash spread across eight SATA SSDs and glued together by an Avago (formerly LSI) hardware RAID controller.

Pairing a hardware RAID controller with several storage devices has been a tried and true way to increase performance for some time. Hardware RAID is the reason why I dove so deep into storage technology long ago. Since then, the cables transformed into ribbons and then evaporated into nothing at all. Flash-based storage changed the game; now the drives no longer sound like a mini factory, and you don't need to pack a full tower case with components to achieve the desired results.

OCZ made all-in-one RAID devices popular with the RevoDrive series of products for the consumer market. The company also offered a line of products designed for the enterprise market. Other companies have released similar products under the guise of PCIe storage; some you may have heard of, and many you haven't. The market exploded with all-in-one RAID products during the SandForce SF2281 era (2012 to 2015). From large companies like Fujitsu down to small custom shops that made a few hundred SSDs per year, vendors used the turnkey designs to deliver high-performance capabilities in an economical form factor.

The MX Technology MXSSDEP3 is a throwback to the all-in-one RAID era, but with a modern flavor.

MX Technology plans to release the MXSSDEP3 series in 1TB, 2TB and 4TB capacities. We only received detailed information on the 2TB model we have in for testing. Our card utilizes eight custom 256GB SSDs. The smaller 1TB model will use eight 128GB modules, and the 4TB will have eight 512GB modules.

An Avago (formally LSI) SAS 3008 hardware RAID controller serves as the heart of the system. The controller allows users to run RAID 0, 1, 1E or 10, but it does not support RAID 5 or 6. It also does not support JBOD (Just a Bunch Of Disks) with the MX firmware installed, but you can flash the firmware to IT mode to gain JBOD functionality. JBOD mode allows you to address the storage pool as eight single 256GB SSDs. A quick internet search discloses the procedure to flash the SAS 3008 firmware into IT passive mode. If you hack the card to IT mode using firmware built for other Avago-based products it would most likely void your warranty.

On the surface, the MX Technology MXSSDEP3 shows a lot of promise as a high-performance SSD. The company plucked the MXSSDEP3's core technology straight out of the data center, but the Avago RAID controller is where the high-performance aspect ends. On the other end of the card, we found eight custom SSDs that utilize SMI's entry-level SM2246EN 4-channel controllers. Silicon Motion, Inc. designed and released the SM2246EN a few years ago to support mainstream MLC flash. We've found SSDs with the controller, like the Crucial BX100, to offer inconsistent performance. Performance consistency is vital to a positive user experience in a RAID array, so the SMI controller is an interesting choice.

The RAID controller spreads the incoming data across eight SATA lanes, which transforms most of the data writes into small blocks. The small-block writes increase the rate of performance degradation. The SAS 3008 RAID controller supports SCSI Unmap (the SAS TRIM equivalent), but getting the command to work with consumer-focused SATA SSDs is hit and miss in IR (RAID) mode. Without some form of working TRIM, the write performance degrades until all of the flash is in a dirty state. In a dirty state, every write to the flash will go through the full latency-killing read, modify, and write cadence.

Avago releases nearly continuous updates for the SAS 3008 controller. Historically, the company addresses a new bug nearly every quarter (3 months). Over the time the product has been on the market, there were several instances of a new firmware released every month. This is both good and bad news for these products in a consumer environment. If you do run into an issue, the company will address it quickly, but at the same time, you need to keep an eye on what changes the company made. Some of the updates address performance, and we've found firmware in the past that actually increases performance through optimizations.

MX Technology claims sequential read performance up to 4,100 MB/s. That is significantly more than the Samsung 960 Pro 2TB we recently reviewed. Sequential write performance ranges up to 3,500 MB/s, which is also much higher than the fastest consumer/prosumer NVMe SSD released thus far. Random performance is lower, though. The MXSSDEP3 provides up to 220,000 random read and 120,000 random write IOPS.

When asked, MX Technology representatives indicate the MXSSDEP3 is a general-use SSD that is available to anyone willing to buy it. We like the no-holds-barred attitude, but will go ahead and say the MXSSDEP3 would work best in workstation applications focused on sequential data. Audio and video production will utilize the performance envelope better than games or applications that have an appetite for random data processing.

What does an enterprise RAID controller paired with eight 256GB consumer SSDs sell for these days? MX Technology's representative told us the MSRP is $2,499 including VAT. In the US, shoppers will not have to worry about the "value-added" tax like European buyers, so we should see a $600 reduction.

The drive ships with a half-height adapter bracket. The Avago SAS 3008 hardware RAID controller manages the system, so the Avago management software works with the drive. The software allows you to change between RAID 0, 1, 1E or 10, so you are not limited to a single volume. You can configure the drive with eight single JBOD SSDs by changing the firmware, or you can configure the system with combinations such as four dual-drive RAID 0 volumes, or with any RAID combination of up to eight drives. The SAS 3008 does not support RAID 5 or RAID 6, though.

The datasheet that MX Technology provided does not list any warranty or endurance information.

Our MX Technology sample had arrived before the final retail packaging was complete. We did receive a rendering of the proposed package. The inner box will be the same as shown, but we don't have the outside package with final graphics. Our drive arrived in an anti-static bag that is not pictured.

The MX Technology MXSSDEP3 uses a passive heatsink to cool the Avago SAS 3008 hardware RAID controller. The controller bridges PCIe 3.0 x8 to eight SAS 12Gb/s channels. The SMI SM2246EN controller only utilizes SATA 6Gb/s to each channel, though. The design is far from revolutionary in 2016, but it still offers very good performance in a world moving quickly away from hardware RAID.

The SSDs use a custom form factor that allows the 3008 controller to run with a full complement of CE (Chip Enable) channels. The 256GB cards on our 2TB drive feature eight NAND flash packages, a single flash controller, and a DRAM package. This is a better design than using the mSATA specification that would limit each module to just four NAND packages.

Next Page Performance Testing
15 Comments Comment from the forums