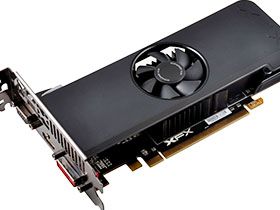 Without a doubt, high-end gaming PCs can get really expensive. Even our definition of "mid-range" hovers around the $1000 mark. With a bunch of PC-derived technology at the heart of Sony's PlayStation 4 and Microsoft's Xbox One, it's no wonder the latest consoles are so appealing at $400 and $500.

There's another way to think about the market, though. Consider how many people own desktops. Sure, a lot of them have old, crappy integrated graphics engines wholly insufficient for gaming. Often times, though, the only component differentiating a weak word processing machine and a capable entertainment platform is a decent graphics card. Adding one might turn a modest little box into a system strong enough for Battlefield 4 or Assassin's Creed IV: Black Flag.

But what if you're on a strict budget? Can you achieve that goal with a hundred dollars or less?

Today we're going to compare inexpensive graphics cards to see what they're capable of in modern titles at fairly demanding settings. We're also going to scrutinize AMD's recently introduced Radeon R7 240 and 250 cards. Do they offer good value to gamers with limited funds for new hardware?

Here are the cards we're comparing, along with their specifications:

A lot of these cards are available across a fairly wide price range. For example, the GeForce GT 640 goes from $60 to twice that number on Newegg. So, I'm citing the third-cheapest price I can find as "typical". No matter how you do the math, though, this is a bit of a challenge for nailing down value. We should still have enough performance data by the end of this story to draw sound conclusions, though.