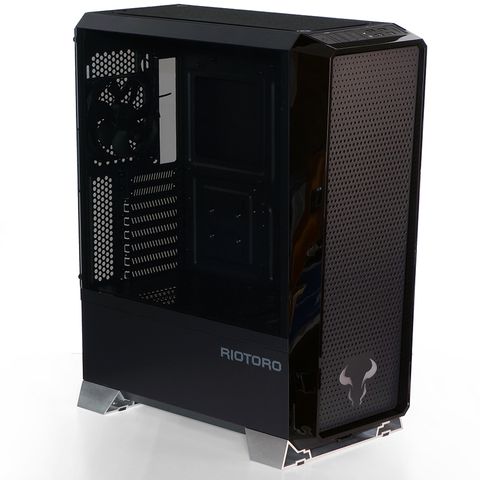 Building Inside The Prism CR1280

Pull the face off, and you'll find two 120mm, 256-color LED fans. Dual 140mm mounts are also available, and there's enough space above and below those fans for the end caps of nearly any radiator.

Embedded mesh turns the entire front panel into a filter, though some dust can be pulled around that filter through the hand hold at the front-panel's bottom. While vacuum cleaning is an option, dust removal is accomplished most-easily with compressed air.

A 0.4" gap allows air to flow around the Prism 1280's smoke-colored plastic cover, and beneath it the top panel supports up to three 120mm fans or two 140mm fans. Direct mounting of 3x120mm radiators could be difficult since the top panel latch is so close to the fan holes, and stacking the radiator beneath those three fans still leaves only around 1.2" for end caps and fittings. Given those limitations, most users will be far more comfortable installing a 2x 140mm radiator here.

There's enough space behind the Prism 1280's motherboard tray to hold nearly any cable, though crossing a second cable over the main power cable may not be possible. Builders will also find a 9"-deep hole to insert the power supply, but cable fitment could be an issue for power supplies longer than 7.5". This is also the side were we find the four-fan (via splitter cables) speed controller, multi-mode LED controller, four 2.5" clip-on drive trays, and four 3.5" clip on trays with screw-in support for 2.5" drives.

The Prism CR1280 installation kit includes six slot covers and two slot screws that are strangely missing from the back when the cases is delivered. Also included are motherboard screws, standoffs, fan screws, 2.5" drive screws for adapting the 3.5" drive trays, and a set of long machine screws for installing a radiator on the opposite side of the fans.

Apparent graininess in the finished photo isn't just a matter of camera settings, as the tinted plastic is also a little cloudy. This visual effect could be due to plastic type, pigment size, or manufacturing process, but it barely distracts from the nice lighting effects.

Prev Page Specifications, Interior And Exterior Next Page Test Results And Conclusion
11 Comments Comment from the forums
Be In the Know