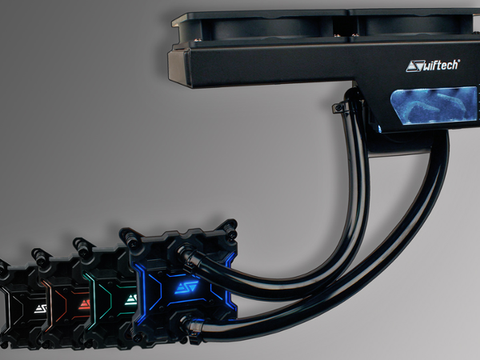 We were a little surprised to see Swiftech’s H220-X under-perform the NZXT Kraken X61. Thinking this might be due to increased case air pressure from its intake-oriented fans, we opened the case and found that the difference hovered between 0 and 1 °C. Upon further consideration, we realized that the Kraken X61's larger radiator and fans are its most likely performance advantage, and would like to encourage our most enthusiastic builders to seek out cases that support a 12.3"-long radiator.

Perhaps slower fans also contributed to the performance difference? Tachometer readings point in that direction, but what about noise levels?

Ah yes, the H220-X is far quieter than the Kraken X61, at least at max fan speed. This is the first closed-loop cooler we’ve seen in this build to compete directly for low-noise honors against big-air.

A comparison of cooling-to-noise shows us that focusing on max fan temperatures and noise really isn’t the best way to rate these coolers. The Kraken X61 has a killer cooling-to-noise ratio at low fans, and if we slide back up to the top chart we can see that it also achieves sufficiently cool temperatures at its reduced fan speed. On the other hand, Swiftech's H220-X fits more cases and is also re-configurable.