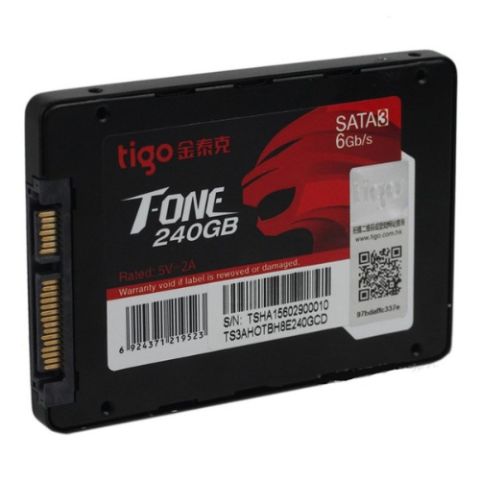 The 256GB-class drives in today's charts still represent a broad range of what you'll find for sale. Adata's SP550, for instance, is nearly identical to the Tigo T-One. Both utilize the same controller and flash. The Crucial MX200 and Samsung 850 EVO belong to the mainstream tier with slightly higher prices compared to the other products. OCZ's Trion 100, Plextor's M6V, Adata's SP550 and SanDisk's Ultra II all fall into the same entry-level category as Tigo's T-One.

At low queue depths, the 240GB T-One delivers less than 500 MB/s in our sequential read test. The drive does kick into a higher gear as the queue depth increases to four and beyond. However, most desktop workloads don't stack commands that deep. It really takes a workstation-level application to get a modern SSD backed up to higher queue depths.

Three of the five SSDs with TLC flash present us with erratic performance results. This comes from the emulated SLC (single-level cell) buffer that briefly increases write performance to try to mask native TLC performance. The 240GB T-One writes 64KB blocks at 350 MB/s to that cache, and then 85 MB/s to TLC flash once the buffer fills.

The SLC does a good job of masking TLC performance in small bursts. Beyond that, write performance lags even mechanical storage, which detracts from your experience. Installing a game, for example, will happen at 85 MB/s or less. Many newer 7200 RPM disks can write data at 200 MB/s or more. You will also notice the lower sequential write speed when transferring files over a GbE network. Instead of enjoying a steady 110 to 115 MB/s, performance is limited to 85 MB/s or less.

Samsung's 850 EVO made its mark by being the first drive with TLC flash to deliver over 10,000 random read IOPS at a queue depth of one. That's the cutoff we use to separate mainstream SSDs from the enthusiast-class ones. The over-10,000 club is very exclusive, and even some PCIe-based drives don't make the cut.

Tigo's 240GB T-One only hits 7150 random read IOPS in this metric. But remember how much it costs. As the workload intensifies, our results do scale well. However, Tigo still fails to outperform the two-year-old 850 EVO.

Low random write speed is more concerning since the drive doesn't scale well and relies heavily on its small emulated SLC buffer. Even though you're getting better numbers than you'd see from a hard disk, they're weak in comparison to other SSDs. It's something you'll have to consider before making a purchase.

Prev Page Specifications, Pricing, Warranty And Accessories Next Page Mixed Workload And Steady State
17 Comments Comment from the forums
Be In the Know