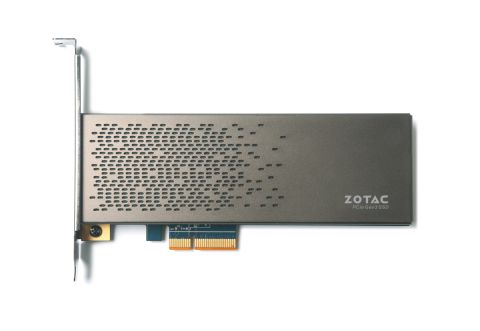 Zotac put together an attractive package for its Sonix. Retail shoppers get to see some information about the product, including a sequential performance estimate. Inside, there's a quick-start guide that walks you through the installation and tells you where to download the drivers required for older operating systems. A second piece of paper outlines the warranty terms.

The Sonix employs a half-height form factor and, again, ships with a half-height bracket. A cage of sorts covers the drive, adding to its enthusiast aesthetic. Under it, you'll find a heat sink, DRAM cache and flash memory.

Zotac is basing its Sonix on Phison's add-in card reference design. But the company doesn't utilize all of the available capacitor pads. In time, we should see competitors use the same assembly with more capacitors to enable greater protection against power failure.

The Sonix does support some of the advanced features mentioned earlier, such as SmartFlush technology and GuaranteedFlush. We see dedicated power circuits on both sides of the card that push buffered data to the flash before power to the card is lost.

Zotac's 480GB configuration calls for a 512MB DRAM buffer that the company deploys in a single package. In addition, you'll find eight Toshiba 15nm MLC flash packages, four on each side of the PCB.

NVMe-based SSDs require a software driver to communicate with Windows, same as any other piece of hardware. Windows 8 and newer operating systems include built-in support. Microsoft has an add-on driver for NVMe, but you'll need to install it using the F6 method or build a custom disk/flash drive with the driver included.

Zotac lists a driver of its own in the quick-start guide. However, we later learned that it's only for installing updates. Phison tells us that the Microsoft driver works just fine.

Both Intel and Samsung have shown us that custom NVMe drivers reduce latency and provide better performance than Microsoft's more compatibility-oriented software. Phison doesn't have an optimized driver of its own for the PS5007-E7 yet, but that could change as it matures.

As far back as the S8, we noticed differences in the way Phison's controllers handled compressible and incompressible data. This manifested in synthetic benchmark performance. Real-world applications made it more difficult to spot discrepancies. But you can bet we're going to look more closely at using taxing workloads and targeted block sizes.

Prev Page Specifications, Pricing, Warranty And Accessories Next Page Four-Corner Performance Testing
17 Comments Comment from the forums
Be In the Know