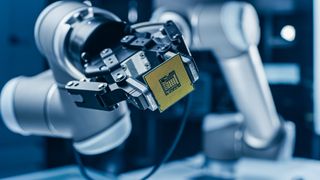 Intel's 10th-Gen Comet Lake-S processors might be in the heat of their launch, but that doesn't stop us from being excited for the chips that succeed it: Rocket Lake. This 11th generation of Intel Core processors is expected to bring an architecture change from Skylake, which we've been stuck on for five years now with nothing more than minor changes. Today, an engineering sample of a Rocket Lake processor has been spotted undergoing 3DMark tests.

The data comes from hardware detective Apisak, who dug up the information from the 3DMark databases. The information details an unknown CPU running at 4.3 GHz with a base clock of 3.2 GHz, packing 8 cores with hyperthreading for sixteen threads. The motherboard (a reference validation platform) gives it away as a Rocket Lake-S processor

The chip has been put through the 3DMark Fire Strike and Time Spy tests, scoring 1746 and 605 points, respectively. These aren't great scores, but again, note that this is a very early engineering sample chip and undoubtedly subject to change.

For now, that's not a lot of information, but it gives us something to go on. Intel is still expected to base its high-performance Rocket Lake-S processors on the 14nm process, so the sub 5 GHz clock speeds might concern you. But, with a new architecture come IPC (Instructions per Clock) improvements, meaning that the chips won't need to run as fast as Intel's Comet Lake-S processors to achieve the same or better performance.

Rocket Lake's new core architecture is also called Willow Cove, which is also expected to be used in the upcoming Tiger Lake CPUs for notebooks, but at 10nm. Once that process matures, we'll could see the 12th-Gen S-series Intel Core chips featuring the new architecture at 10nm, and perhaps even see Intel return to a tick-tock release cycle, where it switches between architecture updates and node shrinks turn-by-turn.

Either way, Intel's Rocket Lake-S chips are rumored to work in the new Z490 motherboards, giving a nice upgrade platform for one hardware generation -- and many Z490 motherboards are already designed to support PCI-Express 4.0 when you install a "next gen" (i.e., Rocket Lake-S) chip in them.

For now, though, we wouldn't read too much into the performance side of these leaks. It's too early to tell anything definitive and ES samples improve over time, so it should all be taken with a pinch of salt.