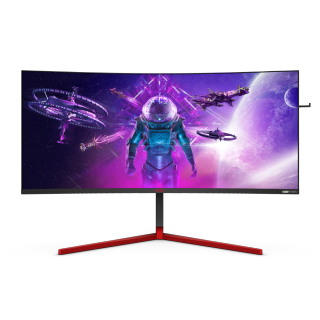 We’ve reached out to AOC’s PR team for a US price and availability and will update this article accordingly once they respond.

AOC has just announced the launch of its latest AGON AG353UCG monitor. Debuting this February in Europe with a retail price of £2,159 it’s spec list is seriously impressive. With a 35-inch 1800R curved form factor, 10-bit VA panel with included Quantum Dot tech, a 200 Hz refresh rate, 2ms G2G response time, HDR 1000 Support (meaning 1000 nits of peak brightness), an impressive 2500:1 static contrast ratio courtesy of 512 local dimming zones, and of course G-Sync Ultimate as standard, if there’s a tech out there for monitors, it’s likely baked into the AG353UCG in some way.

This isn’t the first time we’ve seen a screen with a spec list quite like this, in fact Asus announced its ROG Swift PG35VQ last year and Acer also has the Predator X35 currently on pre-order with exactly the same panel, albeit in a different shroud, the big difference is on price. AOC will sell you this entire setup for £2,159, in fact we’ve seen some retailers list it as low as £2000. As for the competition, Acer’s Predator X35 is currently listed at £2,200 / $2,180, and Asus’s PG35VQ comes in at a hefty £2,460 / $2,500 for an identical spec albeit with a different frame/levels of RGB.