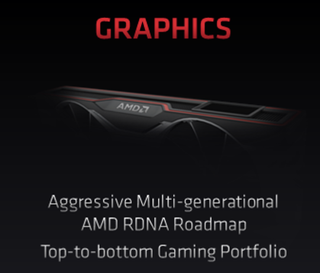 With its RDNA 2, or Big Navi, GPU set to hit the market later this year, AMD finally seems to be catching up with main competitor NVIDIA by moving away from blower fans towards dual and tri-axial fan designs instead in its future graphics cards.

This reveal comes from AMD’s Financial Analyst Day presentation last Wednesday, which teased what Big Navi would look like. While AMD didn’t announce the change directly, one slide during the 3.5 hour presentation focusing on "PC and Gaming Solutions" seemed to show a reference design for the card. An eagle-eyed Redditor quickly posted the design to the r/AMD board, where another user commented on the lack of blowers. Scott Herkelman, AMD vice president and general manager of the Radeon business unit, then confirmed the change, saying "there will be no blower reference fans for gamers on next gen. So you are correct ;)"

Nvidia’s high-end GeForce RTX and GTX lines, which started phasing out blowers back in 2018. While blowers have the advantage of moving hot air directly outside the case, they generally cool worse than axial fan solutions, which use a parallel air flow to disperse hot air inside the case. They also tend to draw more power and run louder.

Herkelman did seem to walk back the reveal somewhat in a later comment, though, where he explained "Our AIBs may choose to do a ‘blower’ design on any of the next gen GPUs…" This might explain why he saved the reveal for a Reddit comment as opposed to a larger stage, but the company overall still seems to be dedicated to the change. "However," Herkelman’s comment continued, "the majority of feedback we received from the community at the launch of 5700 XT on AMD reference designs has guided us towards dual/tri-axial designs." So, while AIBs might choose to use blower fans in their next-gen AMD GPUs, it’s clear that AMD overall is pushing for an update.

Last year, AMD experimented with a triple axial fan cooler in its Radeon VII (Vega) GPU, its first non-blower GPU in generations. Our review for that card was mostly mixed, so we’re curious to see how AMD’s next axial solutions fare.