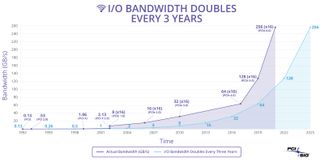 According to PCI-SIG, the final specification should be ready by 2021, so we may be looking at products adopting it sometime in 2022-2023. In comparison, the group released the final PCIe 4.0 specification in October of 2017, and we saw the first products shipping with support for it this year, or two years later.

If we extrapolate, then we should expect the PCIe 6.0 specification to appear in the first products no earlier than the end of 2022 -- unless some manufacturers go ahead with the implementation of a non-final revision of the specification.

However, standards exist for a reason -- to ensure that everyone uses the same design to make interoperability easier and reduce the number of incompatibilities and not give consumers too many headaches.

PCIe 6.0 will once again double the data rate to 64 Gigatransfers per second (GT/s) compared to PCIe 5.0, or a little less than 8GB/s (7880 MB/s) per lane. A PCIe 6.0 x16 slot would then achieve a data rate close to 128 GB/s. The PCI-SIG has always made it its goal to only release a new version of the specification when it can double the data rate of the previous generation.

PCIe 6.0 will also be backward compatible with all previous specification generations, which has been another primary objective of the consortium. The group has implemented two main changes that include PAM-4 (Pulse Amplitude Modulation with four levels) encoding, a technology used by ultra-high-end networking standards, as well as low-latency Forward Error Correction (FEC), which comes with additional mechanisms that increase bandwidth efficiency.