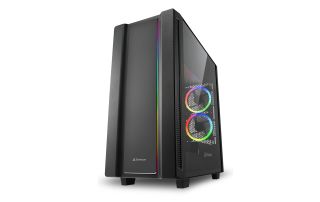 Here's something you don't see every day. Sharkoon built a new case called the REV220, and it comes with a very unique internal layout and packs a total of five fans, filling up every single fan slot from the factory. Better yet, it comes with RGB too, and is priced quite competitively, as spotted by techPowerUp.

The unique internal layout rotates the motherboard internally so that all the IO ports are facing upwards, and comes mirrored too for placing the PC on the left of your desk. This seems very odd, but now that we don't need front optical drives anymore, nor tons of hard drives, it's starting to make some sense to install an ATX motherboard in a landscape orientation.

You'll have to lift the top cover to access the 'rear' IO, but it might just be easier to plug things in than reaching around the back of the case on a tight desk, fumbling to plug a USB cable in blindly.

Moreover, one thing that's always been a shame about the regular ATX layout is that you never get to see your GPU's prettiest side: the one with the fans. Of course, vertically mounting the GPU is the go-to solution for normal layouts, but that comes with a host of expenses for brackets and PCIe riser cables, not to mention the cooling issues. Sharkoon sorts out all those issues as the GPU's fans face forwards as an inevitable consequence of the mirrored and rotated layout.

Topping the deal up further, the front facade is made from diamond-cut aluminum, and has a carbon fiber look surrounding it along with addressable RGB lighting. Of the five included fans, three hide behind the front intake. The two at the rear exhaust come with addressable RGB, so all you'll need to do is ensure you install a supporting motherboard.

European pricing is set at €107, and we would expect an identical number if the case makes it across the oceans to the US.