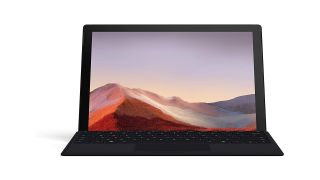 While the Surface Pro 7 alone normally sells for $1,199, the included non-Alcantra keyboard cover typically adds $129 to the price, making the chance to snag a Type Cover for free with an already discounted unit especially tempting. You're getting $1,329 worth of gear with this bundle.

Microsoft Surface Pro 7 with Type Cover: was $1,329 now $999
This is an Intel 10th Gen Core i5-powered tablet with a 12.3-inch multi-touch screen, Wi-Fi 6, Bluetooth 5 and a USB Type-C port. The bundle also includes the protective Type Cover, which has a keyboard and touchpad and usually sells separately for $129.View Deal

A 10th Gen Intel Core i5 CPU keeps the Surface Pro 7. The device also has 8GB of LPDDR4x RAM and a 256GB SSD for storage. While these are tablet-level specs, the inclusion of a current-gen CPU ranks this bundle well above other discounted tablets today.

The Surface Pro 7 boasts a 12.3-inch multi-touschreen at a resolution of 2736 x 1824. The size is comparable to the 11-inch and 12.9-inch iPad Pro models, and the Surface Pro 7's ability to take both pen and finger input makes it plenty versatile. Meanwhile, the included Type Cover means you can switch to a more traditional setup when necessary. Microsoft's Surface Pro 7 also has powerful wireless connections in Wi-Fi 6 and Bluetooth 5.0, as well as a USB Type-C port.

If you’re a Windows loyalist who’s been considering a tablet, this is a great way to jump in.