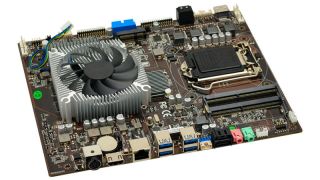 YouTube celebrity Linus Sebastian recently reviewed a very peculiar Intel B150 motherboard from Chinese motherboard manufacturer Zeal-All. The ZA-SK1050 knits Intel's LGA1511 socket with Nvidia's GeForce GTX 1050 Ti onto the same PCB. The manufacturer has never made our best motherboards list, but Zeal-All has been offering this type of product for a while now and the ZA-SK1050 seems to be its latest creation.

The ZA-SK1050 measures 235 x 197.5mm so it doesn't really belong to any established form factors. If we had to classify the motherboad, it would fit in between the FlexATX and microATX categories. The upper half of the ZA-SK1050 is everything you would expect from a pocket friendly motherboard from 2017.

Zeal-All built the motherboard around Intel's budget B150 chipset and LGA1151 socket. Consequently, it can support both 6th and 7th Generation Core processors that belong to the Skylake and Kaby Lake families, respectively. The motherboard doesn't have any power connectors though as all power comes through the single 19V DC port. Finally, a pair of SODIMM DDR4 memory slots are present to offer housing up to a maximum of 32GB of DDR4-2133 memory.

Instead of using expansion slots, Zeal-All has implemented an embedded approach. The manufacturer has slapped a discrete GeForce GTX 1050 Ti graphics card onto the ZA-SK1050 by soldering the GPU and memory chips onto the motherboard's PCB itself. A heatsink with an accompanying cooling fan actively keeps the GeForce GTX 1050 Ti's operating temperatures in check.

The ZA-SK1050 comes with a pretty uncommon I/O interface design as well. The motherboard comes with four SATA III ports in total. Curiously, two of them are placed on the rear panel. There's a mSATA interface for accommodating SSDs of the same nature. Additionally, the motherboard supplies a mPCIe port for adding a wireless module further down the line. The remaining cocktail of internal connectors includes two USB 2.0 headers, one USB 3.0 header, four 4-pin fan connectors, two LVDS headers, two SATA connectors, LPC port (which looks like an HDMI port) for factory debugging, speaker header and the usual front panel connector.

The motherboard's rear panel is home to a clear CMOS button, one HDMI port that outputs images at a 2K resolution, four USB 3.0 ports and one JSATA connector. The Gigabit Ethernet port is based of Realtek's RTL8111E Ethernet controller. The ALC662 audio codec is also from Realtek and powers the two 3.5mm audio jacks.

The ZA-SK1050 supports various types of hardware monitoring, such as temperature, voltage and system power management. The list of supported operating systems consists of Windows 7, Windows 8 and Windows 10.

Zeal-All sells the ZA-SK1050 motherboard on Alibaba for between $345 and $365. Admittedly, B150 motherboards are very hard to come by nowadays. But when they were available, the motherboards generally costed around $50 to $150. The cheapest GeForce GTX 1050 Ti on the market starts at $150. A B150 motherboard and GeForce GTX 1050 Ti combo would set you back $200, which is way cheaper than rolling with Zeal-All's offering. However, the ZA-SK1050's real value would likely lie with some type of AIO PC, an embedded system or a PC for cyber cafes, which are extremely popular in China.