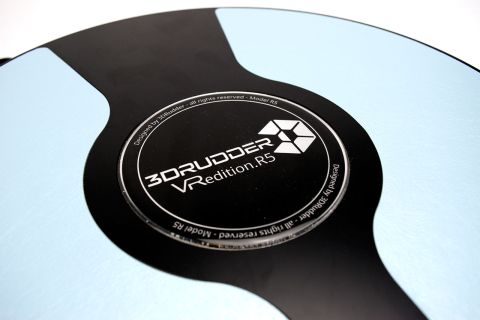 The 3DRudder is an interesting input device which, given the proper developer support, could be a very valuable VR locomotion tool. Consumers would be wise to watch how developers embrace the 3DRudder over the coming months before jumping in.

Virtual reality HMDs are now in the hands of the earliest adopters, but the VR party is just getting started. Just like the PC gaming and console markets, we'll see a wide range of peripherals and accessories to complement and enhance VR experiences. 3DRudder is one such early entrant. Its solution lets you move around virtual environments with your feet, leaving your hands free for other tasks.

We first caught wind of the 3DRudder controller in December 2014, just prior to getting a chance to try it out at CES 2015 in early prototype form. We liked what we saw. The production version of the developer hardware, which has been vastly improved, started shipping to customers in early May, and now that shipments are catching up to pre-orders, 3DRudder sent us a sample so that we could take a deeper look.

At first glance, the 3DRudder appears to be a fairly simple device. It is a 14.57-inch diameter, 3.15-inch-tall, round peripheral that sits on the floor and takes input from your feet. But it's more sophisticated than it appears.

3DRudder also includes accelerometers in the foot controller; these detect foot movement more precisely. The top of the 3DRudder also includes six pressure sensors that can detect when you press down firmly or lift your foot from the controller's surface. 3DRudder uses the pressure sensor information to allow you to move up and down vertically. For example, you move up by lifting your left toes and your right heel. The opposite foot position will make you go down. This feature opens the doors for interesting flying mechanics. It can also be used for zooming in and out in CAD-based applications.

The 3DRudder VR Edition plugs into your PC with a 6-foot long USB 2.0 cable. The hardware doesn’t require any special drivers to work. When the 3DRudder is plugged in, Windows automatically detects it as a joystick.

The USB cable is (somewhat) hardwired into the device, so it can’t be replaced with a longer one without opening up the device. If you need a bit more length, we found that using a USB extension cord works just fine. You can also use the 3DRudder with Android devices via USB-to-MicroUSB dongle. Sadly, the current version won’t work with the retail Gear VR HMD.

The 3DRudder is mostly made of plastic. The bottom of the device features a rubberized grip, which is meant to help keep the 3DRudder planted on the floor. The top is also made of molded plastic. It features two leatherette pads for your feet, which add a bit of texture and grip, but we wouldn’t recommend using it with bare feet. The grips don’t work well if your feet get sweaty; and . . . ewe! (But yeah, we did, in the interest of science.) Shoes and even socks provide far more grip.

Our sample unit is black with blue foot pads, but 3DRudder offers an optional white body, as well as red and orange foot pads.

The base of the 3DRudder is held in place with eight 2mm hex bolts found on the bottom of the device. The components inside the peripheral are all attached to a round piece of clear acrylic glass. The acrylic piece is machined to fit the six pressure sensor modules.

You’ll find the circuit board in the center of the device. It features a 16-bit Microchip PC24FJ128GB204 microcontroller, which does most of the heavy lifting. The microcontroller is flanked by six Avia Semiconductor HX711 analog-to-digital converters that translate the pressure sensor information.

The board also includes a small speaker, several expansion ports that remain unused, and a USB Type B port. A standard USB cable is plugged into the board, which means it should be very easy to replace if you need a longer cable or you happen to damage the one included. The cable is held in place with a bracket that is fastened with two 2.5mm hex bolts.

MORE: The History Of Virtual Reality

Next Page Setup Procedures, Calibration, Reconfiguration, Updates
17 Comments Comment from the forums
Be In the Know