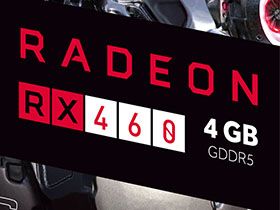 To say we were surprised when AMD started talking about Polaris almost seven months before its roll-out is an understatement. Why build anticipation for next-generation hardware so far in advance, undermining interest in the stuff you’re already selling? Then we got word that Polaris would begin life gunning for volume. I can’t speak for the rest of the tech press, or even other Tom’s Hardware writers, but I admit thinking to myself that the company was setting us up for another re-spin of familiar hardware adapted to the 14nm node.

A few things happened between the beginning of 2016 and now, though. First, we got our first taste of real games written to exploit DirectX 12’s and Vulkan’s features. This is doing a lot more for AMD than it is for Nvidia. Second, we saw Nvidia steamroll the high-end space. There’s no way to know how AMD’s flagship will fare once it’s ready. But putting Vega 10 first would have risked a battle on the brand new process node that could go either way. Instead, the company is bagging one value win after another at 1920x1080 with Polaris. AMD hopes to see that momentum continue with the introduction of Radeon RX 460, based on an entirely new Polaris 11 (code-named Baffin) GPU. We’re told you’ll find this card for $110.

For years, mainstream gamers lapped up AMD’s old designs, repackaged and discounted. Take Radeon R9 370X, for example, which debuted in late 2015 for ~$180. Its Trinidad GPU was the same Curaçao processor at the heart of Radeon R9 270X, introduced in 2013 at a $200 price point. But Curaçao was already a re-brand of Pitcairn, first seen in the Radeon HD 7870. That card came out in March of 2012 for $350. Do we call that trickle-down graphinomics?

The shift to 14nm FinFET inherently means we’re looking at a new GPU, even if Polaris 11 does share a number of attributes with its predecessors. Compared to Polaris 10, composed of 5.7 billion transistors on a 232 mm² die, Radeon RX 460’s processor packs three billion transistors into 123 square millimeters of die space. It’s similarly based on AMD’s fourth-gen GCN architecture, but rebalanced for more power sensitive applications (like thin-and-light notebooks).

A single Graphics Command Processor up front is still responsible for dispatching graphics queues to the Shader Engines. So too are the Asynchronous Compute Engines tasked with handling compute queues. As with Polaris 10, this chip’s command processing logic consists of four ACEs, with two Hardware Scheduler units in place for prioritized queues, temporal/spatial resource management and offloading CPU kernel mode driver scheduling tasks. While many resources are trimmed moving from Polaris 10 to 11, this is not one of them.

Shader Engines, on the other hand, are halved—Polaris 11 gets two, compared to Polaris 10’s four. Moreover, each Polaris 11 SE contains seven active Compute Units, whereas Polaris 10 SEs feature nine. Given 64 Stream processors and four texture units per CU, the math for Polaris 11 adds up to 896 shaders and 56 texture units across the GPU.

Two render back-ends per Shader Engine, each with four ROPs, total 16 pixels per clock, or, again, half of what you get from Radeon RX 480/470. Polaris 11’s memory bus is also cut in half to 128 bits. AMD tries to compensate somewhat with 7 Gb/s GDDR5, but even then you’re only looking at 112 GB/s of bandwidth.

AMD operates the RX 460’s processor at a 1090 MHz base clock rate that boosts up to 1200 MHz. The company sent our U.S. lab Sapphire’s Nitro Radeon RX 460 OC to test, which is overclocked to a 1175 MHz base and 1250 MHz boost frequency. Tom's Hardware Germany received Asus’ Strix RX 460. That card peaks at 1256 MHz in Igor's Doom test, but then throttles back under FurMark.

This won’t affect the performance of these entry-level discrete boards, but it’s interesting to note that Sapphire’s sample uses a x8 PCI Express 3.0 interface, while the Asus card connects all 16 of the slot's available lanes. A <75W typical board power rating would presumably be serviceable by the motherboard alone. However, both the Sapphire and Asus cards add six-pin power connectors.

A Closer Look At The Asus Strix RX 460

Similar to the Radeon RX 470, AMD decided to forgo its own reference design in favor of letting board partners represent the Radeon RX 460. This might result in graphics cards that truly fulfill the 460’s efficiency goals, or not, depending on what type of designs AMD’s partners implement. For us, this means we can only evaluate what AMD sends over, even if we'd prefer a more efficient example of Polaris 11.

Again, both Tom's Hardware US and DE received factory-overclocked cards. Igor took apart his Asus Strix RX 460 with a six-pin power connector for us to analyze more closely. This is quite a change from last spring’s Polaris demo, which didn’t involve any power connectors at all.

Given what we saw in our AMD Radeon RX 470 4GB Review, we have to ask whether there's any benefit to be had from one of these cards factory-overclocked. If there is, how much extra must we pay? We use benchmark results to answer the first question and power consumption measurements to answer the second one.

The jagged Strix design makes a return with Asus’ version of the Radeon RX 460. However, a lower price target exacts a toll; the look and feel take a necessary hit to bring cost down. The fan cover is stuck on, and doesn't sit in place very securely. Weighing in at 493 g, the card stays under half of a kilogram. This is nice to see, since it has a length of 19.5 cm (measured from the slot cover to the card's end) and a height of 11.4 cm (from the top of the motherboard slot to the top of the card), which implies more heft. The depth of 3.5 cm means this is a two-slot graphics card. It doesn’t have a back plate to interfere with adjoining expansion slots, either.

A quick look at the bottom of Asus' Strix RX 460 illustrates that the two nickel-plated heat pipes used to dissipate thermal energy through the aluminum heat sink's fins shrink to 6 mm (compared to the Strix RX 470's 8 mm pipes).

This top-down view gives us a good look at the ends of the heat pipes. Somewhat surprisingly, there’s also a six-pin power connector turned 180 degrees. Given a low-power card like this, based on a GPU that'll go into laptops, we would have thought it could get away with the motherboard's PCIe slot power. This is doubly true since AMD cites a board power rating of less than 75 watts.

Once again, the Strix logo on the card’s upper edge features RGB lighting effects. The four-pin connector for PWM-controlled fans, which are regulated based on card temperature, makes a comeback as well.

Asus exposes three display outputs on its rear bracket, dropping one of the dual-link DVI ports we saw on the Strix RX 470. This leaves the Strix RX 460 with one dual-link DVI-D output, HDMI 2.0b, and a DisplayPort 1.3 (HBR3/1.4 HDR-ready) connector. That's enough for 4K at 120 Hz and 5K resolution at 60 Hz, but not 8K at 60 Hz, which would necessitate a second DisplayPort output.

We already mentioned that the cooler’s cover, with its two 75 mm fans, is simply stuck on, held in place by four pins. The PWM-controlled fans have 3W motors, though our measurements show that they don’t exceed 4W, combined, during stress testing. The first one provides the tachometer control signal.

The cooler’s body consists of a simple aluminum heat sink, two heat pipes made of composite material and pressed into the sink's base, and fins on either side. In order to accelerate heat transfer, the pipes reach up out of the base and back in through the aluminum fins.

Similar to the Strix RX 470 we looked at in our AMD Radeon RX 470 4GB Review, Asus opts not to cool the memory at all. Furthermore, the voltage converters aren’t cooled via the graphics card’s main cooler or its base plate. Instead, there’s a small black cooler made of simple extruded aluminum.

There is no back plate either, which isn't necessarily a bad thing. The very light cooler design doesn’t require a stabilizing frame or brace. This means that the slot cover alone keeps the board from bending.

As usual, we find AMD's GPU in the middle of Asus' PCA. The processor is oriented vertically, and it sits in a simple package that doesn’t have a frame.

There are four 1GB memory ICs next to the GPU, totaling 4GB of GDDR5. They don't show up on Micron's parts list, so all we know is that they offer 8Gb density and can operate at 1750 MHz.

The power supply is simple. There are four phases for the GPU and one for the memory. Similar to the Strix RX 470 and 480, Asus went with an individually-labeled PWM controller and MOSFET drivers, which are made by International Rectifier and support up to four phases in this configuration.

The 3.3V rail gets away without any fancy circuitry since it only uses up to 1W. Meanwhile, the GPU's power phases are designed similarly to what we saw from Asus' Strix RX 470. One M3054 N-Channel MOSFET takes care of the high side, while two M3056 N-Channel MOSFETs serve the low side. All of them come from UBIQ.

As with Asus' Strix RX 470, these components are positioned close to each other on the board, which could result in another concentrated hotspot. We’ll take a closer look using a new overlay shortly.

The corresponding coils are labeled SAP II (Super Alloy Power), and they should offer similar quality as Foxconn's magic coils. For the memory’s single phase, Asus uses one small uP 1540 PWM controller by UPI Semiconductor, which is located on the back of the board right behind the voltage converters.

At the top, there’s the N-Channel MOSFET combination described above with its two M3056 and single M3054, the SAP II coil or choke, and the two solid-state capacitors.

The Strix RX 460 uses an ITE 8915FN to monitor and control the current. The board’s layout looks clean, tidy, and well thought out, even though it could have been a lot shorter. The components reflect what you might expect at this price point, but there aren't any weaknesses to speak of.