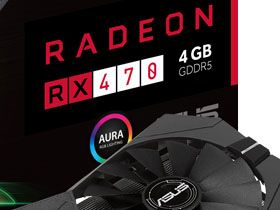 We love to lust after the latest high-end hardware. It’s in our DNA. But just as most coffee enthusiasts can only dream of owning a $7000 La Marzocco, Titan X cards are simply beyond most gamers’ budgets. In fact, according to the July 2016 Steam hardware survey, a scant 1.62% of respondents game at 2560x1440. 4K is buried somewhere deep in “Other,” accounting for a fraction of that category’s 2.05%.

Meanwhile, 1920x1080 is the most popular resolution, carving out 36.61% of the survey. AMD wanted that market so badly that the red team designed its first 14nm GPU with those gamers in mind. The result was Radeon RX 480, which starts at $200 for the 4GB version and is also available with 8GB of GDDR5 for $240.

As AMD struggles to supply enough cards to satisfy demand at those attractive price points, it’s undoubtedly amassing imperfect GPUs that are otherwise usable. Enter Radeon RX 470, based on the same processor as 480, but with four of its Compute Units disabled.

Architecturally, there’s nothing new to say about the “Ellesmere” GPU—it’s the same 5.7 billion transistor processor we introduced in our AMD Radeon RX 480 8GB Review, manufactured on GlobalFoundries’ 14nm FinFET process and occupying 232 square millimeters of die space. If you want a bit of architectural background, it's all covered on the other side of that link.

Whereas the complete configuration sports 36 CUs (with 64 Stream processors and four texture units each), RX 470 employs 32 functional CUs. This reduces the Stream processor count from 2304 to 2048, also leaving 128 texture units enabled. Keep that ratio in mind throughout our benchmarks—you’ll see the performance results come close to mirroring it.

In addition to slower GDDR5, the RX 470’s core takes a clock rate hit compared to RX 480. AMD’s reference specification calls for a 926 MHz base frequency and 1206 MHz boost rate. Using the base clock for our peak compute performance calculation, that’s an FP32 rate of 3.8 TFLOPS. However, the company sent an Asus Strix RX 470 OC Edition operating at 1270 MHz for today’s launch.

The result of AMD’s strategic haircut is a notably lower 120W board power rating (compared to RX 480’s 150W). Asus accordingly arms its Strix RX 470 with one six-pin power connector, though we also have boards in-house with eight-pin connectors. Of course, we’ll get to the in-depth power measurements shortly. But first let’s take a closer look at the Asus card.

AMD isn't shipping a reference-class Radeon RX 470. As you know, the company did introduce its own take on the Radeon RX 480. But this time around, board partners take the reins. That's just fine with us; AMD's own creations typically aren't as well-engineered as competing products.

As mentioned, we received Asus' Strix RX 470 OC Edition, which stands in for all of AMD's board partners today. The Asus model is overclocked to 1270 MHz from the factory (a 5% speed-up compared to AMD's specified Boost frequency). However, once the card is hit with a demanding load, clock rates start scaling back. As a result, we think it's possible that the different RX 470s out there may play on a more even field than their frequencies suggest.

Asus sticks with its familiar Strix aesthetic, which is to say that this board is distinctly jagged and mechanical. It measures 24.2 cm from the slot cover to the end of the card, and it stands 12 cm tall (measured from the top of the motherboard slot to the top of the card). You probably wouldn't call that small or compact. A depth measurement of 3.5 cm comes in just under the maximum for a dual-slot design. There is no back plate to give it extra rigidity.

Asus’ Strix RX 470 weighs in at 640g, which is actually fairly light. This is due to the cooler’s simple design. A quick glance at the bottom of the card reveals that Asus uses just two nickel-plated 8 mm pipes to transfer and spread waste heat. The cooler’s fins are made from aluminum.

The ends of the two heat pipes are visible from the top of Asus' Strix RX 470. From this vantage point, it’s interesting to see that the company went with a six-pin power connector turned 180 degrees. An eight-pin connector could have been used instead since the space and solder pads for it are already on the board. The abandoned plans for an eight-pin plug are even more surprising in light of the fact that this is a RX 470-specific PCB. It's not a re-purposed RX 480 design. Believe us, we're just as curious as you about Asus' thinking here.

Not only does the Strix logo light up, but it adds some extra value by exposing different effects. A quick look at the back of the card reveals Asus' remaining design elements.

A look at the card's four display outputs reveals a unique characteristic: two dual-link DVI connectors. The other two connectors include HDMI 2.0b and DisplayPort 1.3 (HBR3/1.4 HDR-ready). The latter enables 4K at 120 Hz and 5K at 60 Hz. There is no second DisplayPort output, so the 8K at 60 Hz that's theoretically possible using two cables can't be achieved with this card.

It's time to take a closer look inside. Removing the card’s cooler reveals a simple aluminum heat sink. Two flattened 8 mm pipes made from composite material are pressed into its center, making this a DHT (Direct Heat Touch) design. The cooler’s fins are oriented horizontally and held in place on either side by the two pipes. They also touch the heat sink in the center.

It’s striking that Asus' cooler does not include considerations for the graphics memory. The voltage converters aren’t cooled by the card's main heat sink either. Instead, they’re addressed by a separate sink made of simple extruded aluminum.

Asus skips the back plate, which isn't necessarily a bad thing. Instead, there’s a steel frame attached to the top of the board and slot cover with several screws keeping everything securely in place.

As usual, the GPU and its package occupy the center of the PCA. The processor itself is oriented diagonally and protected by a frame that looks a lot like what we've seen from AMD in the past.

Eight memory modules surround the GPU. The H5GC4H24AJR is a 4Gb GDDR5 module by SK hynix. Its 4,294,967,296 bits are distributed across 16 banks, with an operating voltage that ranges from 1.35 and 1.5V, depending on the implementation and clock rate.

The power supply's design is also fairly simple, with four phases for the GPU and two for the memory. The 3.3V rail averages just 1W, so it doesn’t need any fancy circuitry. There’s one M3054 N-Channel MOSFET for the high side and two M3056 N-Channel MOSFETs for the low side. All of the MOSFETs come from UBIQ.

The MOSFETs are positioned quite close to each other on the board, which could result in a concentrated hot spot.

The corresponding coils are labeled SAP II (Super Alloy Power), and they should offer similar quality as Foxconn's magic coils.

For the memory’s two phases, Asus uses one small uP 1540 by UPI Semiconductor each, as well as the N-Channel MOSFET combination described above. One of the two phases is simpler and has just one low-side MOSFET (instead of two), though.

Overall, the board’s layout looks clean, tidy, and well thought out. The single exception is its six-pin power connector, which looks like it was supposed to be an eight-pin connector. It’s unclear why the smaller connector was chosen to replace the larger one; perhaps this was a matter of saving a few cents. Unfortunately, the original configuration would have been the way to go. We aren't sure if accounting or marketing gets the credit, but it'd be great to know what the engineers thought since it'll be difficult to stay within spec using this configuration.