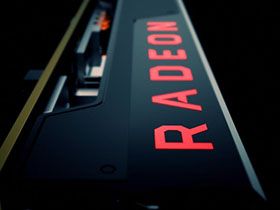 This board’s 238W of power consumption in a gaming workload almost reaches the level of AMD’s Radeon RX Vega 56.

The 245W we measure during FurMark is ultimately only constrained by XFX’s power limit and the cooler’s inability to keep up. Spikes as high as 300W are downright unbecoming of a mainstream graphics card.

Voltage readings averaging 1.18V during our gaming sequence are right about what we expected. They remain consistent so long as the card isn’t thermally bottlenecked.

Load distribution between the rails is good, as our motherboard’s PCIe slot never even comes close to the maximum-allowed 5.5A. Compared to the first Polaris-based cards, which violated that limit, AMD clearly learned its lesson and is now configuring power consumption correctly.

The following graphs illustrate power consumption and current flow over time at idle, during a gaming test, and in FurMark.

Prev Page Wolfenstein II: The New Colossus and World of Warcraft Next Page Temperatures, Clock Rates, and Infrared Measurements
36 Comments Comment from the forums
Be In the Know