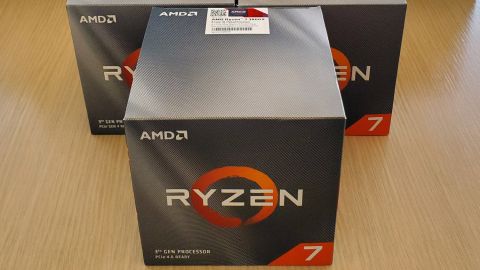 Our power measurements, which we recently migrated towards a more efficiency-focused approach, revealed some interesting tidbits. Particularly in regards to both Precision Boost Overdrive and manual overclocking.

Power consumption measurements are always a bit tricky. But as long as your 12V supply (EPS) readings, motherboard power supply sensor values, and voltage transformer losses plausibly coincide, everything is fine. Therefore, we're using pure package power to avoid possible influences from our motherboard. Results from the PWM controller are very reliable if you take them as averages over a few minutes.

AMD's Precision Boost Overdrive (PBO) is an adaptive overclocking approach that allows the processor to communicate with the platform to modulate performance based on the motherboard's power delivery subsystem and thermal dissipation capabilities. The processor monitors Package Power Tracking (PPT), which is total socket power, and the Thermal Design Current (TDC) variable, which is the motherboard's maximum available sustained current. Electrical Design Current (EDC) also indicates the maximum current possible from the VRMs during peak/transient conditions.

AMD enables two options for PBO: IPM is AMD's default PBO setting, which is activated if you leave the PBO setting to 'Auto' in the Godlike's UEFI. But you can select 'Enabled' to activate a profile that's dictated by the maximum limits of the motherboard's power delivery subsystem. These limits vary by motherboard and are defined by the vendor. We chose the latter to unlock the full potential of PBO. As you can see in the table, this enables the most robust power delivery options available, kicking the socket's maximum power delivery up to 1000W, and is designed to offer the best of increased multi-core boost clocks while retaining the high single-core boost clocks.

You can also further tune the power delivery options with an Auto OC (AOC) feature. This new feature grants you some control over the maximum attainable boost clocks by allowing you to add up to an extra 200MHz to the maximum boost clock, but it isn't guaranteed that the processor will reach those speeds at all times, or under all conditions. Instead, the processor will still respect the limits imposed by the motherboard maker.

Unfortunately, we've found that the PBO+AOC feature often comes at the expense of performance in single-threaded workloads even though it is billed as retaining, and even heightening, single-core boost clocks. From a performance and power consumption standpoint, it is more comparable to our all-core 4.3 GHz overclock. This might be an issue with early AGESA versions, but for now, the feature actually results in less performance in single-threaded workloads with MSI's X570 Godlike motherboard.

We chose to go with the limits of the motherboard, noted on the charts below as PBO, and the all-core 4.3 GHz overclock we outlined on the prior page. It's noteworthy that our all-core overclock comes at the expense of the single-core 4.5 GHz boost, which was a relatively rare occurrence during our testing in both stock and PBO trim.

We began with the non-AVX stress test in AIDA64 and found that the Ryzen 7 3800X draws very little power at stock settings, nearly matching the stock Ryzen 7 3700X's power draw. We activated Precision Boost Overdrive, and the processor's power draw only increased marginally to 95W. Our all-core overclock, however, sucked down 126W on average, but hit 163W peaks during the test.

The y-cruncher benchmark computes pi using a heavy multi-threaded AVX workload and also generates a performance measurement that we can use for efficiency metrics. We're also adding in HandBrake in x264 and x265 flavors. The latter uses a heavier distribution of AVX instructions than the former, but both transcoders are great for stressing the processor with a real-world workload.

We see muted increases in the 3800X's power consumption from the PBO option, and as a result, we also see minor performance improvements. Conversely, the all-core overclock consumes much more power but doesn't yield big performance benefits over the PBO settings. It appears that, for stock operation, AMD has tuned the processors right at the point of the voltage/frequency curve that provides the maximum frequency possible that can still provide great efficiency metrics. This PBO configuration also seems to retain some of those same characteristics, but that doesn't leave much headroom for explosive performance gains.

Plotting power consumption over our performance measurements highlights some of the gains we recorded with both overclocked settings. Here we can see the 3800X's 4.3 GHz all-core overclock regularly outperform the stock and PBO configurations, but its performance is very similar to the Ryzen 7 3700X with PBO. The overclocked 3800X's wins over the tuned 3700X weighed in at 1.91% for y-cruncher, 2.6% for x265, and 3.2% with x264 encoding. That shows that the Ryzen 7 3700X, while slower than the 3800X at stock settings by a larger margin, is competitive in threaded workloads after we tune both processors. Let's see how they compare in games.

Prev Page Boost Clocks, Overclocking, Thermals and Test Setup Next Page VRmark, 3DMark and AotS: Escalation
31 Comments Comment from the forums
Be In the Know