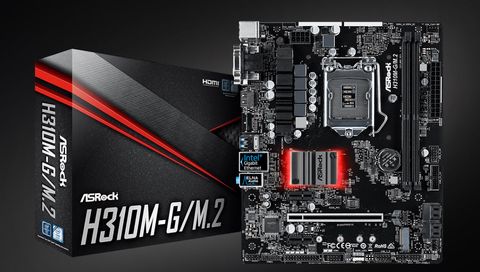 This basic Micro-ATX H310 based motherboard is solid, but priced too high compared to other boards with similar features.

ASRock’s Micro-ATX H310M-G/M.2 motherboard doesn’t exactly roll off the tongue, although few motherboard model names do. But this roughly $120 (£71) board is a well-rounded --though not perfect-- solution for Intel-based builders who don’t plan on overclocking and are looking to save some money over a Z390 alternative.

ASRock places this board on the entry-level side of things, and doesn’t market it specifically at gamers or professionals. But priced priced significantly higher than $100, it’s on the higher side of most of its H310M-based competition.

The ASRock H310M-G/M.2 gives users the basics of a motherboard built on the H310 platform, including support for 9th and 8th generation Intel Core processors, memory support up to 64GB and speeds to DDR4 2666, four SATA3 6Gbps ports and 7.1 channel audio. The board consists of a 5-phase VRM, which will be adequate for any supported CPU, especially since the H310 platform doesn’t support overclocking. Below is a complete list of the  H310M-G/M.2’s specifications.

The board comes with a basic set of accessories designed with just enough included to get started, but not much more. You won’t find the extras like stickers and coasters, but most of what you’ll need for a basic build is included:

Taking a look at the whole board, the PCB itself is black with a high-density glass fabric PCB design said to reduce the gaps between PCB layers, protecting the motherboard against electrical shorts caused by humidity. Along with black board are black DRAM slots and SATA ports, with the chipset heatsink sporting the only integrated LED illumination onboard--red-colored only. The heatsink on the VRM is grey but looks to have enough surface area to do the job.

The H310M-G/M.2 forgoes any design elements on the PCB. It’s just business here in order to keep costs down and prices reasonably low.

Overall there’s really nothing to get excited about on the aesthetics front, but nothing negative to say unless you really crave integrated RGB LEDs or fancy designs on the PCB. Due to its generic design, the board should fit into many build themes.

Taking a look at the top half of the board, since we do not have a shroud, we can see the tops of the rear IO bits along with the heatsink for the VRM on the left-hand side. Located just above the left bank of the 5-phase VRM is a single 8-pin EPS connector feeding power to the CPU. In the upper-right, we find two fan headers, both 4-pin, capable of controlling through voltage or PWM methods and capable of 1A/12W output.

We won’t spend a lot of time on the VRMs here since the H310 chipset is locked for overclocking, but the 5-phase setup was plenty capable of driving the i3-8350K, a 91W part, without issue during our testing. This board is the only one of the three we used to compare it against that includes a heatsink on the VRM.

On the right side, we see the two DRAM slots capable of supporting up to 64GB, with speeds up to DDR4 2666--again, if you want higher memory speeds, this isn’t the platform for you. To the right of the memory slots is the 24-pin ATX connector as well as a front panel USB 2.0 and USB 3.1 Gen 1 headers.

The bottom left portion of the board contains the Realtek ALC887 audio codec and the ELNA audio caps. In order to enable 7.1 channel audio, users are required to use the HD front panel audio module and enable it through the multi-channel audio feature in the driver.

The Micro-ATX H310M-G/M.2 has one full-length PCIe slot which uses ASRock’s slot-wrapping “steel slot technology.” This cover is said to prevent signal interference and helps support heavier graphics cards. According to the board’s product page, AMD Quad CrossfireX is supported. But unless AMD is about to launch wireless graphics cards or a way of plugging in three extra cards to the single x16 slot here, we’re going to chalk this feature up to an erroneous copy/paste from a higher-end board in ASRock’s lineup. In addition to the full-length slot, there are two x1 size slots flanking the primary GPU slot above and below.

Sitting under the full-length PCIe slot is a single M.2 Key M socket capable of supporting up to a 80mm size module. The socket supports either SATA3 6Gbps or PCIe 2.0 x4 drives. Remember, the H310 chipset does not offer PCIe 3.0 lanes, only a total of 6 PCIe 2.0 lanes. So if a SATA-type M.2 module is installed, SATA port 3 will be disabled.

For SATA storage, the H310M-G/M.2 delivers the chipset’s full complement of four, and they’re located in the bottom-right corner. Unlike the H370 and Z370 platforms, H310 does not support Intel RST SATA (or PCIe) RAID. If running RAID is a requirement, you will need to get an expansion card or a different board on a higher-end platform.

Just below the SATA ports is the third fan header (CHA_FAN2/WP) which doubles as a water pump header. This 4-pin setup is able to output 2A/24W.

Across the bottom are several headers including additional USB headers, front panel audio, and two RGB LED headers (one addressable). The bullet points below list the headers from left to right.

The rear I/O on this motherboard is made up of three video outputs, D-Sub, DVI-D, and HDMI (1.4) ports for using the integrated GPU, a legacy PS/2 port, four USB 2.0 headers and two USB 3.1 Gen1 (5 Gbps) ports in blue. The Intel I219-V RJ-45 jack sits above a set of USB ports. Last is a 3-plug analog audio stack. Most H310 boards lack USB 3.1 Gen 2 ports/headers, unless the board uses a third-party controller, as this chipset forgoes integrated support.