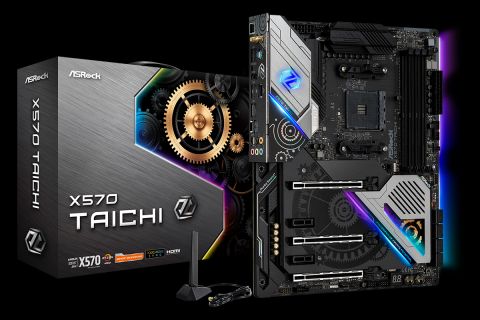 We updated our most-recent X470 test system to support AMD’s latest hardware with Microsoft’s latest Windows 10 patches. The hardware gets a small update too, to Gigabyte’s GeForce RTX 2070 Gaming OC 8G. Also, since XMP memory mode has no effect on AMD’s frequency management, we’ve enabled it.

Both X570 boards edged out the elder X470 in 3DMark Firestrike Extreme, but the X570 Taichi stood out by also beating both generations of Gigabyte board in PCMark’s  MS Office bench.

After getting replaced in our graphics test, the F1 series returns to motherboard testing due to its ability to single out poor memory performance. Today’s boards are on a level field there, though the X470 model fell behind in Ashes of the Singularity.

We switched to the integrated benchmark for 7-Zip, and that meant getting a performance score rather than a compression time. It breaks out of the timed applications chart, but none of the tested boards broke out of the pack in this benchmark.

Nothing looked unusual in the timed tests either, where the winning and losing scores were too close to raise any concerns about software or firmware configuration.

Finally, a test that really stands out! ASRock’s X570 Taichi consumed far more power at full load, and a quick search for the cause revealed that this board, and only this board, was running the 3700X at 1.31V and 4.1GHz under Prime95 small-FFTs. The other boards were running less than 1.2V, at 3.9 to 4.0 GHz in this test.

Just to prove that the voltage reading wasn’t a mistake, the X570 Taichi pushed our CPU core temperature to 81 degrees Celsius in a 22-degrees ambient room. At least its voltage regulator kept its cool.

A quick look at our calculations also shows which test suites were used for our overall performance, efficiency, and value calculations. The X570 Taichi’s improved performance in PCMark’s Productivity test provide most of its 0.7% over-average advantage.

Slight performance advantages aside, the Taichi’s terrible power numbers destroy its image in our power-to-performance comparison. And that’s an average of best (idle) and worst (full load) power readings, not simply an effort to highlight the worst of its traits.

PCIe 4.0 is the main reason to buy an X570 board over its X470 predecessor, yet we’re not loading the PCIe bus heavily enough to show the benefit in our standard battery of tests. That capability is something to keep in mind if you own a bunch of storage and would like to upgrade it all to the faster standard.

That the X470 is a better value for people who don’t need the extra PCIe bandwidth explains why AMD told us that the older chipset will stick around well beyond the new one taking center stage. Yet those who need the bandwidth can easily justify the X570’s approximate $40 premium. The value analysis problem for the X570 Taichi is that it costs far more than the X570’s general price premium. We’re looking at a $70 difference in list price and a $90 difference when considering current discounts on older models.

If $40 is the cost of supporting the newer chipset, where does the other $30 go? A chunk of it certainly goes towards the upgraded 802.11ax Wi-Fi controller, and another chunk to the upgraded voltage regulator. But we have a feeling that a small chunk is going for that full-lower-half motherboard shroud that requires every card to be pulled and for the owner to find a 2mm hex key driver every time an M.2 drive has to be swapped.

And then there’s the fan whine, which isn’t loud but can certainly be annoying after what seems like endless hours of use. Buyers must also wonder how much they're paying for that aluminum plate that’s mounted to the back of the board, only to be obscured and made redundant by the motherboard tray. Back covers such as the X570 Taichi’s are certain to be appreciated by people who test boards for a living, but there's no practical function for end users.

Apart from the value premise that buyers will be paying for the inconvenience of removing so large a top cover to access any M.2 slots and likewise paying for a beautiful rear shield that they’ll never see, the X570 Taichi is a great board. The PCH fan speed can be turned down to reduce noise, or the board can be placed in a case that does a good job of containing the fan whine. Overall though, we’d rather pay a a little less for a board without unnecessary covers and in turn have easy access to our M.2 slots.